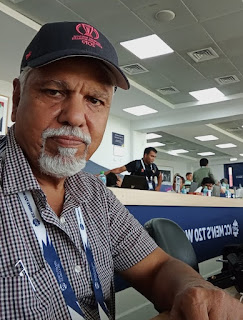 The trio of Daryl Mitchell, Devon Conway and Jimmy Neesham powered New Zealand to the ICC T20 World Cup final when they outsmarted England by five wickets at the Zayed Stadium in Abu Dhabi on November 10.
It was a night to remember for the New Zealanders who quietly came from behind to break the shackles in the final overs to script one of their famous wins in white ball cricket. They needed 57 from the last four overs and completed the job with full one over to spare.
It was a sweet revenge by Blackcaps to their defeat at the hands of England in the 50 overs final at Lord’s London in 2019 which was decided on super over.
Playing the innings of his lifetime, Mitchell smashed an unconquered 72 off 47 balls to be declared Man of the Match. The hard-hitting Neesham banged 27 in mere 11 balls with three towering sixes and one four while Conway laid the platform a solid 46 off 38 balls.
New Zealand looked in dire straits while chasing the target of 167 when they lost their prolific duo of opener Mark Guptill and captain Kane Williamson very early. But the manner in which the relatively inexperienced campaigners reconstructed the innings was truly commendable.
England appeared to have gained decisive control over the game when occasional leg-spinner Liam Livingstone delivered a sensational four-over spell in which he not only picked a couple of wickets but also gave away only 22 runs. Eion Morgan could not asked for better performance with the ball from his fifth bowler.
Incredibly, New Zealand chose to take the experienced bowlers to be put to sword. Chris Jordan, who bowled a probing opening spell of two overs, was hammered for 23 runs in the 17th over and his new-ball partner Chris Woakes was hammered for 20 in the 19th over to settle the issue without going into the final over.
Put into bat, England seemed to have done well to post a total of 166 for four in the allotted overs with left-handed Moeen Ali scoring a brilliant unbeaten 51 off 37 balls. David Malan also scored an enterprising 41 off 30 balls while Livingstone sparkled briefly for his 17 off 10 balls.

Nice and helpful article. And also nice to know about this. thanks for sharing with us.
live cricket score