The spinners played the decisive role as Qadri Model School and The Educators School prevailed over Zeeshan Secondary School and Khan Secondary School respectively in the latest league matches of the Omar Trophy Inter-School Cricket Tournament 2016, being organized by the Pakistan Veterans Cricket Association (PVCA). 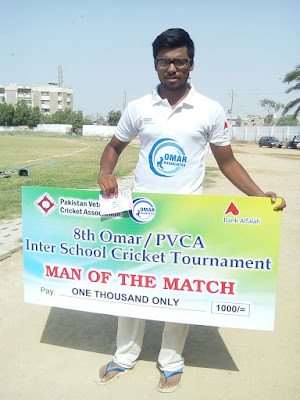 Electing to bat, after winning the toss, Zeeshan Secondary School was spun out for 108 in 21.5 overs but they fought back to reduce their opponents to 76 for five at one stage.

Qadri Model School, however, settled the issue with the 33-run unbroken sixth wicket stand which allowed them to win with as many as 16.4 overs to spare.

All-rounder Abdul Basit, declared Man of the Match, played the key role in guiding Qadri Model School to victory. He followed a five-wicket haul with a crucial knock of 30.

Zeeshan Secondary School seemed heading towards a big total before being tormented by the spin duo of Abdul Basit (5-21) and Saad Bin Yousuf (3-23) as they lost their last nine wickets for only 61 runs to be bowled out for 108. Mohammad Bilal (36 off 59 balls) was their topscorer with the next highest contribution coming from Mr Extras (31).

Chasing a modest target of 109 in 40 overs, Qadri Model School lost their first three wickets, all of them to medium-pacer Waleed Khan, rather cheaply. Opener Abdul Basit’s 30 off 44 balls revived them but the match became alive when his departure was followed by another quick wicket. 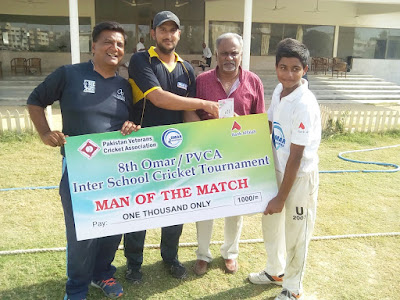 It was Auranhzeb Ahmed’s unbeaten 38 off 56 balls which sealed the fate of the match in Qadri Model School’s favour. He was assisted by Mohammad Sami, who returned undefeated on 19 off 22 balls.

In the other game, The Educators School, who batted first after calling correctly, slumped to 138 all out in 33.5 overs against Khan Secondary School having lost their last nine wickets for only 40.

They managed to defend what looked like a below-par total successfully by bowling their opponents out for only 118 in 33.1 overs.

Fine knocks from number three Mohammad Moazzam (34 off 47 balls) and opener Aryan Ali (31 off 50 balls) had laid the platform for a big total for The Educators Schools who collapsed dramatically against the spin duo of Majid Aslam (4-40) and Sher Bahadur (3-27).

The Educators School’s left-arm spinner, Uzair Ali Khan, adjudged Man of the Match, produced a sensational spell of 6.1 overs during which he claimed four wickets for only eight runs. He was supported by leg-spinner Sameer Ahmed (3-20) and off-spinner Zaid Bin Haris (2-4).
readmore »»