The dream has finally come true and the World XI, featuring international cricketers from different corners of the globe, has landed in Karachi on October 18 and the bunch is enjoying its stay in the city about which they had heard stories of various sorts over the years. 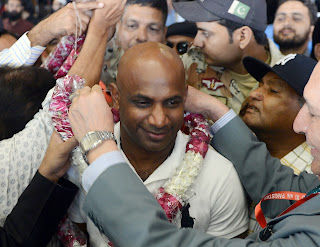 They arrived in batches and were accorded heroes welcome at the Jinnah International Airport by the Sindh Sports Minister and Chief Organizer, Dr Syed Mohammad Ali Shah, besides other members of the committee, having top officials of the Karachi City Cricket Association.

Dr Shah considered the arrival of the international players a good sign for the future of cricket within the region. He termed the upcoming four days as extremely vital in resuscitating cricket within Pakistan.

The South Africans were first to arrive in the early hours and they were followed by their teammates from the West Indies, Sri Lanka and Afghanistan. They were garlanded upon their arrival and there was large presence of the media at the airport to meet and greet them amid strict security arrangements. 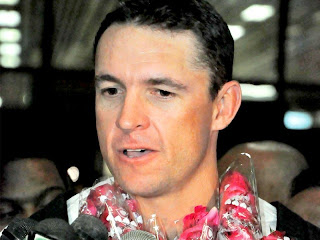 The World XI is being led by Sri Lanka’s former captain Sanath Jayasuriya, whose swashbuckling knocks must be fresh in the minds of his large number of fans in Pakistan.

The World XI will lock horns against the Pakistan XI, being skippered by Shahid Khan Afridi, in back to back Twenty20 matches under floodlights at the National Stadium, Karachi, on October 20 and 21. They will be playing for the A O Trophy.

Jayasuriya hoped that these couple of games would help bring international cricket back to the troubled land.

“I am happy to be back in Pakistan after a long time. The people here love cricket and the two exhibition matches will be a big occasion for the game,” Jayasuriya told reporters at the airport. 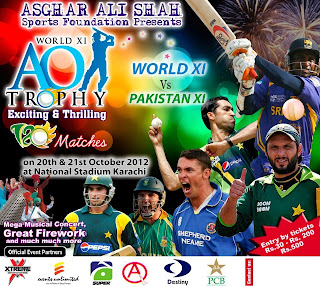 Manager Alvin Kallicharran from the West Indies was ecstatic to be back in Pakistan after more than three decades, declaring that there should be no issues in the revival of international cricket in this part of the world.

All-rounder Ricardo Powell, also from the West Indies, didn’t have any apprehensions about playing in Pakistan either, saying it’s is a good opportunity for them to provide some excitement to cricket fans in Karachi.

South Africa fast bowler Andrea Nel stated that the purpose of the visit was to help Pakistan and help the return of top-flight international cricket in the country.

Another South Africa cricketer Nantie Hayward felt that it was his ‘responsibility as a cricketer to help the game.’

All the foreign cricketers, as well as the home team, were moved to a heavily guarded five-star hotel of Karachi where they were observed enjoying themselves as normally as anywhere else in the world.
readmore »»