The end of an era for sure

Although cricket is a game of uncertainty and nothing could be predicted or assessed surely but when it comes to the Indians going downhill everything becomes very clearly predictable.

When the Indians are not on top of their game it means catastrophe for them for all practical purposes because nothing comes to save them. When Mahendra Singh Dhoni’s side was whitewashed in England last summer there was a feeling that the injuries to key players contributed decisively to their downfall.

But the manner in which their full strength has been bulldozed in Australia now the message is loud and clear that their batting stalwarts are over the hill and the trio of Sachin Tendulkar, Rahul Dravid and V V S Laxman needs to be shown the door.

The greatness of Tendulkar, Dravid and Laxman can never be doubted but they have done enough disservice to their team by not being able to save a single Test match in last eight attempts overseas.

Call it shameful or disgraceful losing eight Tests on a trot away from home is a blot for what used to be the top ranked side before. The team which used to win Test matches at the strength of its batters in every corner of the world is now unable to force even a draw on the most placid of pitches.

The trio of Tendulkar, Dravid and Laxman served the cause of the Indian cricket in their heydays but they have been under the hammer for the past eight months. They have failed miserably in the challenging conditions of England and Australia where they used to score freely in the past.

The Indian selectors as well as their think-tank seemed to have missed a trick by not having taken the preventive measures. Another factor to have contributed in their downward journey appears to be the absence of Garry Kirsten, who had excelled in the role of a coach.

Duncan Fletcher must be having credentials to be a competent coach but he’s nowhere near to the class of the brainy Kirsten who suited the Indians in many ways and was chiefly responsible for taking them to the top of the ladder.

Obviously in a country like India where cricket is much more than just a sport, it’s never easy or even practical to make tough calls. That’s why the Greg Chappell theory of institutionalization didn’t work in his stint as the Indian coach. 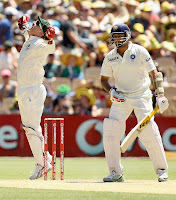 Some other countries might have dumped Tendulkar and Laxman right away after the disastrous tour of England but it might not have been possible doing it in India as the matter could easily have been taken to the parliament or people would turned to streets in protest.

If India had to lose all four Tests in Australia, they would have been better off doing it with a young brigade. Suresh Raina and Rohit Sharma could have scored more than Tendulkar, Dravid and Laxman as Virat Kohli proved.

Kohli’s start to Test career wasn’t an impressive one but he has improved in leaps and bounds lately. Sharma and Raina, both of them natural stroke-makers, could have also benefited greatly if given a chance there.
readmore »»