Everybody knows that the strangest of things happen in Pakistan. Be it national politics or the most talked about game of cricket one is never tired of watching the most unlikeliest of events taking place.

I mentioned politics and cricket in particular because these are the prime areas of interest for the common man in Pakistan. Every newspaper and television channel covers the minutest of details of cricket because that’s the sport having a massive following in the urban as well as the rural areas of the country.

Yet the game of cricket is governed most controversially. In other words it are the emotions of the people being played with. But who cares here. The present Chairman of the Pakistan Cricket Board (PCB), Ijaz Butt, has broken all records of indecency and his adventures continue unabated despite the consistent and loud media criticism. 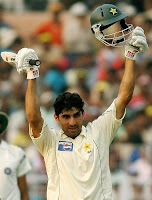 The latest from Ijaz Butt is the appointment of Misbah-ul-Haq, who was not even a member of the national team for quite sometime because of the loss of batting form, has suddenly been elevated to the rank of the captain.

Misbah should not be believing his luck. He hardly deserved to be there in the team and now he would be leading it during the upcoming Test series against South Africa in the United Arab Emirates (UAE).

There are rumours that Misbah won the nod upon the recommendation of an influential politician, who is also believed to have facilitated the return of Mohammad Yousuf during the Test series against England a few months ago. The stories were also doing rounds that Shoaib Akhtar’s comeback in the team was also made possible by another high-profile political figure.

Such possibilities could not be ruled out because Ijaz Butt has been ‘ruling’ Pakistan cricket for the past couple of years primarily with the support of the politicians who get their work done with the blink of an eye.

Former captain Wasim Akram didn’t take time in having expressed shock at the appointment of Misbah as Test captain.

"I was surprised when I heard that Misbah has been named the Pakistan captain. He has been out of the team since the beginning of the year and to bring him back as a captain was a bit shocking," he remarked.

"They did not have too many choices. Kamran Akmal is there but he is inexperienced. They have also tried Shoaib Malik. Mohammad Yousuf is making a comeback after a long time and he should just concentrate on his batting at the moment. If they have named him the captain for one series, it's okay. He is already 36 and the PCB needs to find a long-term solution to this problem. I do not know the vision of the selectors," he added.

Wasim reckoned that Misbah will have a key role as a leader in the South Africa series, “He will be under pressure. He will have to improve the image of Pakistan cricket. For Misbah handling the media and getting runs himself could be demanding. The wickets in Dubai might suit his style of batting, but you cannot take the South Africans lightly. They are a very tough opposition under any conditions. Misbah needs to work hard and make sure he earns the faith of the team. If he gets runs, everything else will take care of itself," the former captain felt.
readmore »»