Opener Mohammad Rehan hammered an incredible unbeaten double century as Fahad Academy sneaked into the final of the Omar Trophy Inter-School Cricket Tournament 2016, being organized by the Pakistan Veterans Cricket Association (PVCA), by edging out Kamran Public School one wicket in the second semifinal at the National Stadium Karachi on November 12. 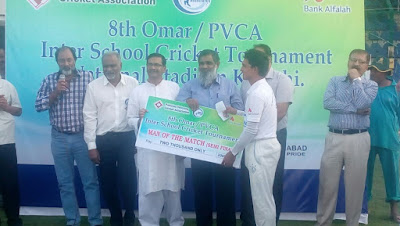 Fahad Academy, having ended as the runners-up in the previous edition of the tournament, has another chance of clinching the title as they take on Qadri Public School in the final at the same venue on November 13.

The semifinal between Fahad Academy and Kamran Public School turned out to be an epic encounter in which 633 runs were scored off 79.4 overs and the issue was decided with just two balls remaining. It produced a couple of stunning knocks, one from either side.

Skipper Anus Ilyas, who opened the innings, scored a magnificent 160 to help Kamran Public School post a mammoth score of 316 in 40 overs. But he was upstaged by Fahad Academy’s opener Mohammad Rehan who remained undefeated on a staggering 221 to guide his team to victory in the final over with last man at the other other end.

Batting first, Kamran Public School got off to an exhilarating start and they sustained the tempo until the end of their innings. Anus Ilyas, who struck five sixes and 20 fours in his 160 off 113 balls, dominated the 91-run opening partnership with Hasan Jaffery who made a solid 33 off 55 balls with the help of two fours.

Anus Ilyas was then engaged in a 190-run second wicket stand with Obaidullah, who whacked 10 fours in his breezy 91 off 67 balls. Kamran Public School lost only three wickets while score 316 in their allotted 40 overs.

Chasing a formidable total of 317, Fahad Academy also got off to a flyer as the opening pair of Mohammad Rehan and Hammad Hasan added 90 for the first wicket. Kamran Public School pulled it back through the spin duo of Hasan Jaffery (2-25) and Mohammad Owais (2-64) but they were unable to dislodge Mohammad Rehan who fought a lone battle against all kind of bowlers.

The fate of the match remained hinged on Mohammad Rehan as the wicket tumbled around him at regular intervals. His job was yet not done even after completing the landmark of double century.

Fahad Academy still needed 11 runs for victory when he was joined by last man Naeem Gul. There was drama and excitement until Mohammad Rehan hit the winning the run to take his side to victory. He remained undefeated on 221 off 116 balls with the help of eight sixes and 28 fours to richly deserve Man of the Match award.
readmore »»