It was in the fitness of things that the final was played between the only two unbeaten cueists of the competition in which a total of 37 cueists from 16 countries of Asia took part. The match was wide open after nine frames and it needed something special from the world champion to press home the advantage.

“I thank Allah for the glory. It is because of him that I have this opportunity and I am happy that I won the tournament. I am happy that I was able to win it for Pakistan. Earlier this year, in the Asian tournament, I was going through a bad patch but then I have recovered well here. This tournament win has boosted my morale,” Asif observed.

“It is difficult to keep the tempo of the game consistent. After all the opponent also has some ideas plays his game too. He is a finalist, a very mature player also. He has played well over the last year. It was always going to be difficult to beat him so fast. I played well in the first three games. He slowed the game down. Thanks to Allah, I was able to control my nerves and win it. I was 5-2 up and then he made it 5-4. These are moments which make it difficult for a player. It is always good to step out a bit, go away from the game a bit, get relaxed, in such situations,” he added.

The result meant another major glory for the 31-year-old Asif having annexed the IBSF World Snooker Championship 2012 at Bulgaria, Sofia, less than six months ago. 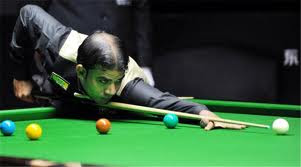 The title victory at Doha meant an added satisfaction for Asif, hailing from the industrial town of Faisalabad, because he was little sad at having toppled compatriot Mohammad Sajjad in the quarter-finals.

“At some level, there definitely was some sadness because both of us are compatriots, have played in the same place. So when the two come up against each other, it is a different feeling,” he was quoted as saying after the match.

After having blasted Mohammad Shehab of the United Arab Emirates (UAE) 5-1 in the pre-quarter-finals, Asif was particularly pleased to have overwhelmed the dashing Indian youngster Laxman Rawat 6-2 in the semifinals.

The 21-year-old from Delhi, looking like the dark horse of the tournament, had also won all his three league matches before outwitting compatriot Shivam Arora, Afghanistan's reigning Asian champion, Saleh Mohammad Mohammadi, and Thailand's Yuttapop Pakpoj in the knockout games.
readmore »»
Links to this post