Several articles are being written and many talk shows aired already on this subject and why not. This is the series between the two top ranked Test sides and there is very little to choose between them. 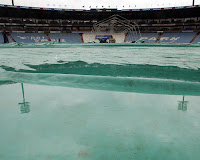 Primarily because of the conditions over there the South Africans are being rated a bit higher but I have a different opinion in this matter. Gone are the days when the home advantage decided the fate of the series. With neutral umpires and extensive television coverage there’s not much disadvantage to the visiting team.

Yes I agree that the South Africans have greater experience of playing on their turf but that doesn’t mean they can’t be floored in their own backyard by a superior outfit. The current Indian team, led by Mahendra Singh Dhoni, stands a very good chance of winning the Test series in South Africa.
I think the hosts could be low on confidence, no matter what their captain or coach may be saying publicly, because of their inability to win any of the two Test matches against Pakistan in the United Arab Emirates (UAE) recently.

Neither did the South Africans bat convincingly nor did they sustain pressure with their bowling. Allowing Pakistan to get away with it on both occasions was a clear reflection of their opponents lacking the firepower to close the deal. 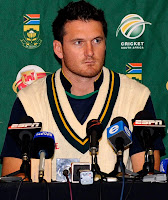 The Pakistan team they were confronted was very short on experience, besides having a new captain. As a matter of fact the entire Pakistan team had less number of Test runs or wickets than Jacques Kallis.

Remember that Ricky Ponting’s Australians had lost a Test match to a similar Pakistan in England earlier this year. What has happened since then for the Aussies is nothing short of a nightmare.

Well the South Africans didn’t play bad enough to lose to Pakistan but they were not good enough either to overpower their inexperienced rivals. We will have to wait and see how much they get affected after the below par performance in the desert.
Graeme Smith is banking on weather and pitch to derail India. Obviously the batsmen would be tested with plenty of short stuff and there could be banana swing as well if it continues to be overcast.

In my estimation the Indian batsmen of all people are more likely to come to grips with these conditions. They can collapse once or twice but the possibilities of them to folding every time appear very remote indeed.

The Indian fast bowlers would certainly enjoying doing the job in South Africa rather than back home. The absence of Zaheer Khan will leave a big hole and the responsibility will have to be shared by the other bowlers.

But it are the Indian batsmen who hold the key.If they put runs on the board, Dhoni will have the liberty to set attacking fields for his bowlers, a factor which could bring the home batsmen under greater pressure.
The Indian supporters should, however, not lose sight of the fact that their team despite being so formidable on paper has that knack of faltering against the run of play. That’s why I think India hold just a slight edge over South Africa.
readmore »»

Pakistan’s campaign in the IBSF World’s Men Snooker Championship 2010, staged at the Al-Faiha Sports City in Damascus, Syria, came to a premature end with the exit of Imran Shahzad in the pre-quarter-finals on December 13

There were high hopes of the world crown returning to Pakistan after 16 long years when all the three participating cueists, Mohammad Sajjad, Sohail Shahzad and Imran Shahzad, had played remarkably well in the league matches.

While Sajjad and Sohail were eliminated in the round of 32, Imran went through to the pre-quarters where he was toppled by the veteran Alex Borg of Malta. 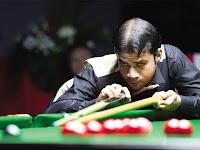 The cueists from Thailand blew the whistle on the other two Pakistani youngsters, who had been in terrific form in the earlier games. 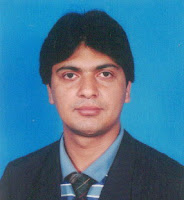 It was certainly a keenly contested tie and the young Sohail, making his debut in the World Championship, had the satisfaction of having gone down fighting.

Dechawat Poomjaeng was even more ruthless while hammering Mohammad Sajjad in straight frames with the scores of 71-36, 72-71, 78-24, 83-42, 65-44. Pakistan’s premier cueist offered a challenge in each of the five frames, with the second one being the closest, but could not press home the advantage in any of them.

The failure of the Pakistan’s cueists in the knockout games once again brought to light their inability to handle the pressure. There remained question marks over their mental toughness.
readmore »»