England, who were at the receiving end in what has been the upset of the tournament so far, have opened up the Cricket World Cup 2011 by shocking South Africa, one of the favourites to life the title, in Chennai on March 6. 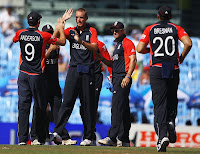 The unexpected result not only keeps England afloat in the tournament but it also sends some definite signals to other fancied teams. South Africa, by no means, are in danger of not proceeding to the quarter-finals but their defeat from a position of strength will certainly make the other contenders for the title breathe a little more comfortably.

In fact South Africa’s loss at the hands of England would not only mean something to the teams in their own group but it would also have an affect on the outfits in the rival group.

There is a clear message to the teams like Pakistan, Australia and Sri Lanka, who are more likely to share the top three positions in the Group A that a possible clash with South Africa in the knockout stage, would not necessarily mean the end of the road for them as was being anticipated before the start of the tournament.

The South Africans have a very powerful side but their indifferent performance against England should certainly serve as a wake-up call for the think-tank. If their top batsmen can succumb to the pace or swing of James Anderson and Stuart Broad on a turning wicket while chasing the most modest of targets they need to go back to the drawing board to reassess their strengths and weaknesses.

England, quite amazingly, have had close encounters in all their four outings in the competition so far. They had chased down successfully a target close to 300 in their opening game against the Netherlands before overcoming a sensational middle-order collapse to tie the following match against India after being set a mammoth target of 339.

They, however, were found wanting in defending a 300-plus score against minnows Ireland for whom Kevin O’Brien played an innings of lifetime to turn it around in most emphatic of styles. 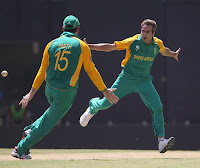 With Ireland having come into the reckoning with the surprise win, the pressure was on England to deliver while taking on the mighty South Africa. Although the pitch was offering purchase to the spinners from the outset England didn’t seem to be having any chance after being bowled out for a below par score.

Graeme Smith and Hashim Amla kick-started the South African chase and an early finish to the game looked round the corner. But a drama followed and all the big guns of South Africa choked in the same manner as they are notorious for in crunch games. Their premier batsmen like A B de Villers and J P Duminy, who are otherwise exceptionally talented and skilled, need to take crash courses to learn how to cope with the pressure.

It’s quite extraordinary that the South Africans lose the plot so quickly from the driving seat despite being in possession of heavy arsenal. There’s something wrong somewhere which prevents them from coming up with the kind of performance that’s expected of them in global tournaments.
readmore »»