Posted by Editor at 10:00 AM .
0 comments
Labels: Shane Bond
By Syed Khalid Mahmood

Three wickets for 18 runs off four overs. These are the figures that would surely make every bowler proud in any form of the game. The analysis will be considered even better if it’s achieved in a limited overs contest. These would obviously be recognized as exceptional figures in the shortest version of the sport. 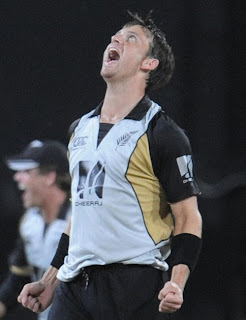 In that context the bowling performance of New Zealand’s spearhead Shane Bond, making a return to international cricket, was better than the best as he powered his team to a magnificent 22-run win over Sri Lanka in the second Twenty20 International at R Premadasa Stadium in Colombo on September 4.

Although Jesse Ryder ran away with the Man of the Match award, for his half century as well as outstanding fielding, it was the superlative spell of fast bowling from Bond that sealed the fate of the game as well as the series.

New Zealand, having sneaked a narrow victory in the previous game, had done well to reach a total of 171 but the target could never have been considered out of reach of the Sri Lankans on a pitch where slower bowlers were more likely to do the business.

With Bond back to take the new ball the bowling attack of New Zealand gained more potency and purpose. It’s always a huge advantage to have a quality fast bowler attack with the shining ball rather than having an ordinary mortal spraying in different directions with the intent on containment.

There is no better way of controlling the rate of scoring than take wickets. That is exactly what New Zealand are more likely to do when they have someone like Bond having the ball in his hand.

I think it was Bond more than anyone else who made the difference. He dismissed the dangerous Tillekaratne Dilshan in the very first over to open the floodgates. Kyle Mills, who shared the new ball with him, was also lifted and he responded with two quick wickets to deny the hosts the kind of flying start they needed to be ahead to chase down a target of 172.

Mahela Jaywardene and Kumar Sangakkara revived Sri Lanka with an enterprising fourth wicket partnership but the New Zealanders knew they always had a chance when they broke through. 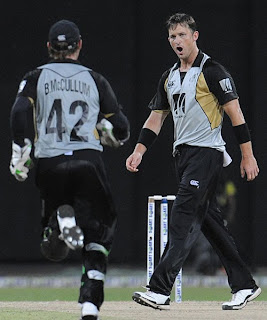 Daniel Vettori looked a more confident leader, after the nightmarish two-Test series in which his team was blanked. He deserved the credit for having kept the motivated after the debacle and his inspirational captaincy was instrumental in bringing about the turnaround.

New Zealand, who lost the Test series 0-2, have won the Twenty20 series 2-0. They have lifted their game considerably and their rejuvenated outfit would be a threat to both Sri Lanka as well as India in the upcoming series of One-day Internationals.

New Zealand, who looked pedestrian in the Test matches due to the lack of firepower in their bowling attack, have come to life of late. Bond has helped their cause immensely, providing Vettori a much-needed attacking option.
readmore »»