Australia did what the South Africans had done earlier in the season. The inspired South African line-up had provided the Australian crowds cricket of the highest quality when they pocketed the Test as well as the ODI series against the reigning world champions. 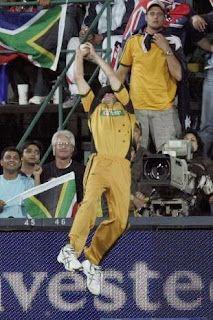 The Australians couldn’t clinch the ODI series in South Africa, after having snatched the Test series, but their youthful side gave a wonderful exhibition of all-round cricket to entertain the spectators.

With back-to-back series wins over Australia, the South Africans are worthy to be rated as the strongest team in One-day Internationals and they indeed are the top ranked ODI side at the moment.

The contests between Australia and South Africa have often produced exhilarating cricket and the rivalry between the two evenly-matched outfits has remained fierce all along.

With proactive captains like Ricky Ponting and Graeme Smith leading from the front, the intensity of the game has to be on the higher side. Both of them are tough cricketers and they take pride in playing the game the hard way. Neither of the two has ever been prepared to take things for granted.

South Africa had done a fabulous job by closing the ODI series in the fourth game but the Australians came hard at their opponents in the fifth and final encounter even though the rubber was dead.

The consolation victory in the last match in Johannesburg allowed Australia to move to the second position in the ODI rankings. They showed great resilience in the field and thoroughly deserved to win the day.

South Africa appeared poised to take home the ODI series 4-1 against Australia for the second time running when Herschelle Gibbs and Jacques Kallis were milking runs at will in the middle of the innings.

The target of 304 in 50 overs under floodlights was never going to be easy against the spirited Australian bowling attack being backed by their fleet-footed fielders. But the hosts became the firm favourites when they raised the 150 of their innings with the loss of just one wicket and Gibbs and Kallis on top of the bowling.

Gibbs, having smashed a brilliant century earlier in the series, was trifle lucky to have been declared leg-before when in sight of another ton. His dismissal brought to the crease A B de Villiers who kept the momentum going in the company of the well-set Kallis as 118 more were needed off the 16 overs that didn’t look a tall order with eight wickets in hand.

The complexion of the game changed in the next few overs when Kallis played a loose shot. The Australian left-arm quickies Nathan Bracken and Mitchell Johnson delivered at the crucial stage of the innings and the spectacular catch taken by Ben Laughlin to send back the dangerous Albie Morkel allowed Australia to gain control. Laughlin then sealed the fate of the game by yorking de Villiers in the first over of the batting Powerplay.

Earlier in the day the Australians had overcome a middle-order collapse to post a total in the excess of 300. They were set for a much bigger total after the explosive start to their innings provided by Brad Haddin and Michael Clarke.

It were the slow bowlers again who derailed Australia. Even though the regular off-spinner Johan Botha was not playing even the duo of Roelof van der Merwe and J P Duminy did enough damage to keep the total in check. It was only a late flurry of strokes from Michael Hussey that took Australia to 300.