The Sindh Archery Association (SAA) celebrated its revival by holding the inaugural Ziauddin Valika Memorial Archery Tournament with fanfare at the historic Al-Nadi-al-Burhani Sports Complex, situated at Old Queens Road in Karachi, on May 1. 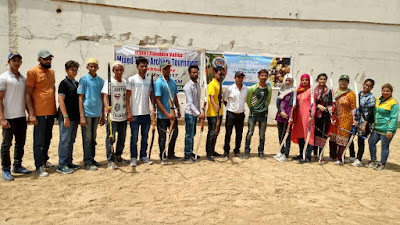 There were a couple of competitions organized by the SAA on the May Day. The duo of Tahir Najamuddin Mandviwala and Kanwal Ansar emerged the champions in the mixed doubles event while

Rasheeda Ziauddin Valika was the chief guest in the prize distribution ceremony held soon after the conclusion of the twin events. She presented cash awards and trophies to the outstanding performers.

Tahir Mandviwala and Kanwal Ansar clinched the mixed doubles event by outshining Murtaza Hussain and Zara Khan in the final. The third position was clinched by Khizar Shaikh and Kinza Baloch.

Danyal Valika ended as the runner-up, finishing just behind the eventual champion, Tahir Mandviwala, in the individual spitfire competition in which Khizar Shaikh came third.

The SAA, inspired by its new chief patron, Zain Valika, braved the dust and the heat of an oppressive summer day to organize the day-long tournament with renewed enthusiasm, indicating that it’s a new beginning for the sport of archery in the province.

As the contestants continued to display their expertise by hitting a target fixed on 25-metre distance, on its sidelines it was the SAA chief patron who entertained the guests besides having chats with the media corps.

“We all know that strong character leads to confidence in any arena. Archery is considered an outlet with measurable improvement which helps to increase self-reliance, self-assurance, self-worth, and self-respect. Individuals with strong character and confidence create a better community. The SAA desires to play its role in helping to build healthy humans by engaging the youngsters in archery,” Zain Valika explained.
readmore »»