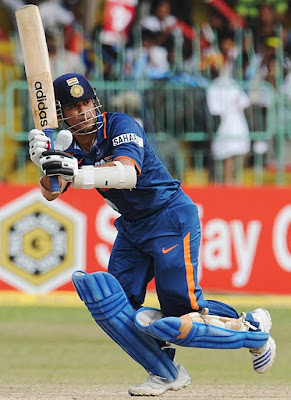 India, more than any country, have had to earn their win. It’s very uncommon to watch them register a triumph without hiccups. Irrespective of their own strength and the weakness of their opponents they have had to struggle many times against the run of play.

Who would have expected Sri Lanka to frighten India in the final of the Compaq Cup at the R Premadasa Stadium in Colombo on September 14 after the latter had posted a massive total of 319?

No matter how big target they are defending and how difficult the conditions for batting are, the Indians can never be expected to take things for granted. The unlikeliest of events take place against them. They very nearly got rolled over by an inexperienced Sri Lankan middle-order.

Sri Lanka did hold the psychological advantage entering the final, after having blown away India in the league meeting less than 48 hours ago, but there was only team that looked like to dominate once the target of 320 was set under floodlights.

The Sri Lankans not only embarrassed the Indians but at times forced them on to the defensive. All credit to Mahendra Singh Dhoni and his team for battling all odds to finally conjure up a win that should have been theirs without so much of drama.

Isn’t it quite extraordinary that the Sri Lankan batsmen, who have remained generally inconsistent against other teams, get pumped up while taking on the Indians? Probably they fancy their chances of getting away with it while confronting India.

No matter how strong, balanced and potent the Indians may me they look vulnerable when least expected. With a little bit of more luck they could have also lost the final despite being so well placed for most of the time.

Sachin Tendulkar played one of his greatest innings in international career. Harbhajan Singh delivered one of the finest spells under pressure. Yet India were not assured of a victory until the last Sri Lankan wicket fell.

India did the basics right and were rewarded for their endurance. The move to elevate Rahul Dravid as opener instead of the out of form Dinesh Karthik paid dividends. It was such a wonderful sight watching Dravid and Tendulkar bat together. They laid the strong foundation that was so vital for posting an imposing total. 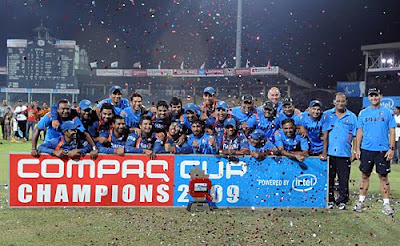 Dhoni took the responsibility of milking the bowling in the company of Tendulkar and the run rate was not allowed to dip. The Indians could have eyed a total in the region of 350 after being so well placed at the end of 30 overs.

Dhoni, however, was not prepared to take the risk of giving it away after the great start. He didn’t open up until the batting powerplay was taken when the ball was changed. Unfortunately he was snapped before he could blast the bowlers. Yuvraj Singh took his time while Tendulkar also remained cautious even after his hundred. They exploded far too late and the Indians were happy to get to 319 in the end.

The Indians might have thought that anything in the excess of 300 was safe, given the history of the ground. But what they had ignored that the majority of the miracles come about at their expense. They barely survived another one that night.