What a fascinating sight it has been to witness the flood-lit matches on the very pleasant nights of Karachi at the picturesque Naya Nazimabad Lawai Stadium whose settings resemble to those lovely cricket grounds of Australia and South Africa. 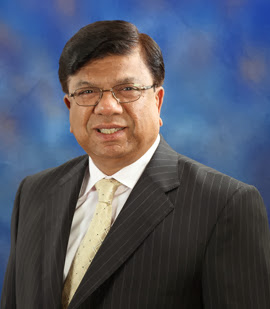 Arif Habib, Chairman, Arif Habib Group, deserves the credit for having developed such a magnificent cricket stadium in remarkably short span of time. His passion for the gentleman's game is well known and he has done a great service to the cricket enthusiasts of Karachi by gifting this wonderful ground to them.

The inaugural edition of the Peace Cup Twenty20 Cricket Tournament 2013, contested by some of the leading outfits of city, alongwith a few outstations ones, came to an end recently after the majority of the matches had been staged during the Holy month of Ramazan.

The Naya Nazimabad Peace Cup remained a spectacle for the participating cricketers as well as the large number of spectators who thoroughly enjoyed the close contests and, most significantly, complete ‘peace’ was observed in every match. 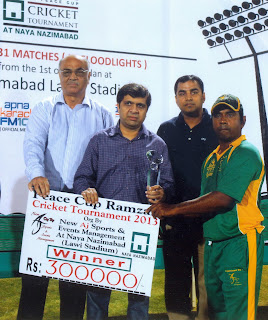 Omar Cricket Club extended their purple patch by winning the Peace Cup Twenty20 Cricket Tournament 2013 as they outwitted Qasmi Cricket Club by four runs in the tensely fought final on yet another beautiful night at the Naya Nazimabad Lawai Stadium.

Left-handed batsman Shaharyar Ghani and left-arm pacer Rumman Rais Khan were the stars of the final as Omar CC, despite a hat-trick by off-spinner Haris Ayaz, continued their march towards glory by annexing fifth local tournament. It was another feature in the cap of Nadeem Omar whose Omar Associates and Omar CC have dominated the local cricket scene.

Batting first, Omar CC was bowled out for 134 on the final ball of their innings. Shaharyar Ghani was the top scorer with 48 off 31 balls, hammering two sixes and four fours. Fakhar Zaman (32 not out) and Akbar-ur-Rahman (31) ensured a fighting total after the innings was rocked by the spin trio of Haris Ayaz (3-31), Wasim Ali (2-15) and Fahim Ahmed (2-24). 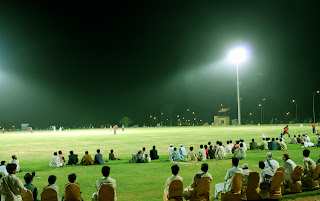 Qasmi CC failed in their pursuit of reaching the target of 135 although fine knocks from Zakir Malik (31), Mohammad Rizwan (25), Tariq Haroon (20) and Waqas Haroon (20) put them at striking distance. The raw pace of Rumman Rais Khan made the difference in the end as the youngster claimed four wickets for 15 runs to limit Qasmi CC to 130 for nine in 20 overs. Adnan Kalim (2-14) and Misbah Khan (2-20) also bowled superbly in what turned out to be a low-scoring thriller.

The prize distribution ceremony, in which cash awards of more than Rupees half a million were disbursed, was held at the ground immediately after the conclusion of the final with Samad A Habib, Chief Executive Officer (CEO), Javedan Corporation Limited, being the chief guest of the night. Mohammad Iqbal, a former cricketer and Director of the corporation, also graced the occasion alongwith some other officials of the company, who had worked tirelessly to make the tournament a success story.

A total of 16 teams took part in the tournament and they were divided equally in four groups for the first round. The top two teams from each group advanced to the knockout stage of the competition having started with the quarter-finals.
readmore »»