Munaf Patel indeed was unsung hero of India's recent World Cup triumph as pointed out by their bowling coach Eric Simons. He was the bowler who stood tall in the pressure-cooker situations in the friendliest of batting conditions. 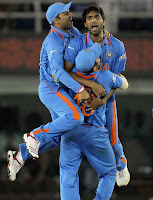 The Indian batters were flashed prominently on the front pages of the newspapers for making the runs but there was little mention of their bowlers who stuck to their task and delivered at the right times.

The Indian bowlers, in fact, were being targeted by the media for leaking far too many runs in the earlier part of the competition without realizing that the pitches were flat with no margin of error whatsoever.

India’s problems were compounded when their leg-spinner Piyush Chawla, drafted in the team as a secret weapon, was unable to perform beyond the warm-up games and Shantikumaran Sreesanth, the liveliest of their medium-pacers, was all over the place. The fitness of injury-prone Ashish Nehra remained an issue as ever.

There were not too many options up their sleeves and the pressure was on Patel to stop the flow of runs from his end to allow Zaheer Khan to attack with the new ball. Both these bowlers put in great effort to let the spinners play their part according to the plan.

While the success of Zaheer Khan was not unexpected for he has been the spearhead of the attack for a long time, the performance of Patel, who might not have even played the World Cup if Praveen Kumar was fit, exceeded expectations. With a tally of 11 scalps, he was India's third-highest wicket-taker in the World Cup.

Simons made the right observation that the high degree of technical skills that India's bowling attack possessed made up for its lack of express pace all through the tournament.

"We had singled out the bowlers for the last 3-4 series and Praveen's injury had been a setback for us as he was part of our plans,” the Indian bowling coach stated, adding that it was Patel who had given the bowling unit reassurance when he arrived, with both an awareness of his own skills and his ability to adapt.

"Munaf is one of the unsung heroes of the World Cup for us - he stepped in and played a vital part for us, after we lost Praveen and Ashish suffered from injuries during the tournament. Munaf has learnt to understand his bowling and stuck to his game plan taking some crucial wickets," he complimented. "Munaf never once doubted himself or what he could offer the team. His work ethic is enormous; he has a very strong and steady head on his shoulders and calmness in any situation. He gave Zaheer the freedom to bowl very freely and aggressively." Simons acknowledged.

The terrific performance in the World Cup opens the floodgates for Patel, who was once rated as the fastest bowler in India. He used to generate tremendous pace at the start of his career but he lost his radar and momentum resulting in his disappearance from the scene far too quickly than anticipated.

He has staged a very forceful comeback in international cricket and he should now be deemed a certainty for India’s tours to the West Indies, England and Australia later this year.
readmore »»