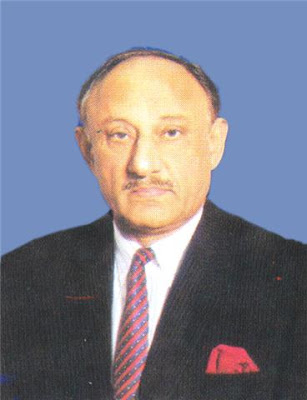 The legendary figure of Brigadier Syed Manzoor Hussain Atif, whose name became synonymous with the Pakistan hockey due to his very long stint with the game, passed away on December 8 in Rawalpindi, the historic town neighbouring capital Islamabad. He had turned 81 only the other month.

Brig Atif, however, was not actively associated with the game during the last few years of his life. He was laid low by the growing health problems that had also restricted his travel.

In fact Brig Atif had very reluctantly regretted attending the grand reception in the honour of his mentor and icon Air Marshal Nur Khan in March 2007. He was invited as one of the keynote speakers for the dinner-reception organized by the Brotherhood Sports Society of Pakistan (BSSP), whose President, Waqar Hasan, a former Test cricketer, was very keen to have all the central figures of the Air Marshal Nur Khan team there.

The night was memorable in which the likes of Anwar Ahmad Khan, Jahangir Khan, Javed Miandad and Islahuddin had recalled their experiences of working with the great Air Marshal Nur Khan. But we missed Brig Atif who, I reckon, possessed the most intimate of relationships with the Air Marshal and it was their joint action that brought so much glory for Pakistan.

Brig Atif was a strong willed man whose result-oriented approach also made him somewhat ruthless at times. But he was not afraid of undue criticism. He made some tough calls but they were generally in the larger interest of the game.

Records aside, Brig Atif’s services to the game of hockey in Pakistan cannot be adequately described in words. He stands heads and shoulders above any other individual as far as the contribution to the Pakistan hockey is concerned. He did not believe in half measures and his commitment was total.

Brig Atif had entered the hockey arena in a role of a full-back. After having played for the country in as many as four editions of the Olympic Games, he undertook the managerial responsibilities before devoting his energies to the administration. He had become the centre-forward of the Pakistan hockey affairs and remained in this position for quite sometime with remarkable success.

Obviously, like any other human being in this planet, he also committed mistakes or even blunders during his long career. But mostly they appeared to be errors of judgment and seldom did his integrity was put into doubt.

One incident I am reminded of had occurred in 1988. Pakistan had crashed to defeat in one of the Test matches at the Hockey Club of Pakistan Stadium, Karachi, and a section of the crowd was chanting slogans against the national team.

My photojournalist colleague at The Frontier Post, Morrison Bhatti, had a great sense of humour. After having shot a few snaps of the disgruntled fans he jokingly advised them to point their fingers on Brig Atif instead of targeting the players.

Morrison Bhatti, preparing to pack his lenses, was oblivious of the fact that Brig Atif was in fact standing right behind us, having overheard the conversation. Brig Atif was furious and some harsh words were exchanged. The scene could have become uglier but the interference of other media professionals helped cool down the emotions.

Morrison Bhatti, to register his protest, influenced some of the fellow photojournalists to boycott the reception the Pakistan Hockey Federation (PHF) was hosting the same night. But Brig Atif was quick to respond and came all the way down to the media corps present ton the occasion to explain the situation that cleared the misunderstanding.

That was the great ability of Brig Atif. He knew exactly how to accomplish his goals. He tackled the pressure-cooker situations with broad smile on his face. It’s very unlikely that the Pakistan hockey will ever produce an administrator of his class and caliber.
readmore »»