Shoaib Ahmad Siddiqui, Secretary, Sports and Youth Affairs, Government of Sindh, who has been the motivating force in making things happens on a fast track as far as the activities of sports at the provincial level are concerned, has vowed to take the sport of bowling, popular sport of the urban areas, to the interior regions of the province. 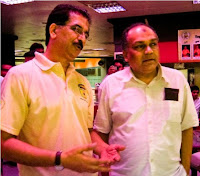 Shoaib Siddiqui, who had taken over the chief of the sports department of Sindh in October 2008, firmly believes that it’s the fundamental right if every citizen to have access to the sporting facilities.

More significantly he also reckons that the government, besides the corporate sector, has a responsibility to create the sports infrastructure to let the common man engage himself in healthy activities.

The visionary and responsible government officers like him, who believe in meeting the challenge and overcoming the obstacles, are the ones who bring about a change despite the shortcomings in the system. It’s easier said than done. 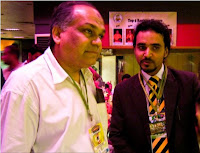 Shoaib Siddiqui gladdened the hearts of the enthusiasts of the sport of bowling by supporting one of their tournaments recently which was organized by the Sindh Tenpin Bowling Association with the venue being the bustling Thunder Pins housed in Millennium Mall which is one of the favourite destinations for the youth of Gulshan-e-Iqbal, Gulistan-e-Jauhar and other adjoining areas.

It was the first ranking bowling event to be staged in Pakistan, made possible by the Sindh Sports Board (SSB). It was a major accomplishment for the organizers who had also made an appearance in the 13th Sindh Games 2010 held in Karachi.

The inaugural Sindh Inter-League Bowling Tournament 2010 was acclaimed as a success story with about 50 bowlers having registered in the masters and amateur categories. The outstanding performers of the landmark three-day were rewarded with cash prizes besides certificates and trophies. 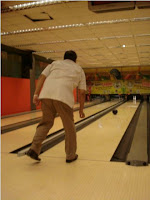 Hanif Mohammad Mirchawala, Director Sports, Government of Sindh, was the chief guest in the presentation ceremony of the tournament having been inaugurated by the departmental chief, Shoaib Ahmed Siddiqui.

“I suggest that the Sindh Sport Board should provide us with the space to open up a bowling arena in terms of private-public partnership. We are trying our level best to make this sports reachable for every class, a technician who won gold dedal in 13thSindh Games Tenpin Bowling Event 2010 amateur category is the living example,” Romis Ali General Secretary, STBA, observed in his welcome speech.

Top Seed Shabbir Lashkarwala lived up to the billing to become the first Sindh Inter-League champion by scoring an average of 172. He was also the gold medalist in the13th Sindh Games 2010 Tenpin Bowling event.

Rashid Ali, Syed Zubair and Aleem Agha claimed the next three positions in the masters’ category with Mahmood Ahmed claiming the award for the highest score of 236.

Abdullah Tahir emerged the champion in the amateur singles while the next three positions were shared by Shahjahan, Abid Ahmed and Faizan Tariq. Abdullah Tahir got another prize for his being the top scorer with 214.