England must have realized it now, if they didn’t do it earlier, that coming to terms with Pakistan present a much different kind of challenge than taking on any other outfit anywhere in the world. They dominated the second Test of the ongoing three-match series at Abu Dhabi only to lose it in the unlikeliest of circumstances at the fag end. 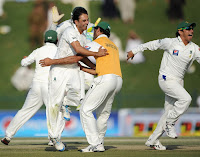 After having succumbed to a three-day drubbing in the first Test at Dubai, England held all cards in their pocket right from the outset in the second Test until a dramatic collapse saw them routed for 72 while chasing a modest 145.

It was a game in which England held the upper hand in every session barring the last one which proved decisive in the end. The series has already been decided and Andrew Strauss must be wondering if he has any tricks left up his sleeves to avoid being whitewashed.

Strauss and company had come to the United Arab Emirates (UAE) as the number one ranked Test team of the world, a status they achieved by humbling India at home last summer. Little did they know that they would be mauled by a Pakistan outfit that had a compromise captain in Misbah-ul-Haq and an interim coach in Mohsin Khan!

People often have short memory hence they tend to forget the past instances little too quickly. Well the treatment meted out to England by Pakistan is nothing new. It had happened in 2005-06 as well when Michael Vaughan’s men had descended in this part of the world after having regained ‘The Ashes’ by overpowering the all-conquering Australia.

England were brought down to earth by Pakistan at a time when Vaughan’s hopes and confidence level was sky high. The same has happened again. Now it’s time for Strauss for bite the dust.

From Pakistan’s point of view they had nothing to lose going into the series. And they have shocked their most ardent of supporters by taming the top ranked side of the world as if they were toying with the minnows.

England collapsed against Pakistan in their second innings at Abu Dhabi on January 28 not much differently than Zimbabwe had done earlier in the day in their first innings against New Zealand at Napier. 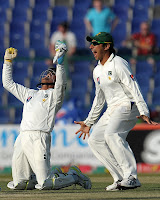 In fact, had England scored as much as the Zimbabweans did in their second innings, after following on, they would have emerged triumphant in the Abu Dhabi Test.

It’s time for Misbah and Mohsin to celebrate again. They are being lifted on the shoulders by their teammates. I don’t know what Chaudhary Zaka Ashraf, the newly appointed Chairman of the Pakistan Cricket Board (PCB), now thinks about Mohsin, whom he tried to ridicule in a bid to accommodate Dav Whatmore.

He might be thinking differently now. He must be wondering if Pakistan do need a ‘qualified ‘coach or a ‘natural’ captain if Misbah and Mohsin continue producing stunning results as they have done during the past few months in which the lady luck has been with them all along.
readmore »»