Suman overshadows Kohli and others 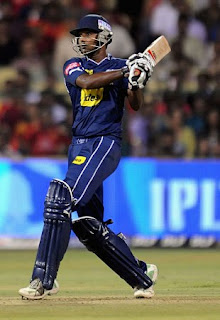 The high-scoring fixture between Deccan Chargers and Royal Challengers Bangalore in the Indian Premier League (IPL) 2010 kept the spectators on the edge of their seats at the M Chinnaswamy Stadium in Bangalore on April 8.

It’s not often that a target of 185 is overtaken in a Twenty20 game but Deccan Chargers were powered to victory by Tirumalsetti Suman who remained unbeaten in 78 off 57 balls. It was a magnificent knock from a lesser-known player and the night belonged to him. He was very rightly adjudged Man of the Match.

The Australian duo of Adam Gilchrist and Andrew Symonds also played their role in guiding the Chargers to a seven-wicket victory with four balls to spare. Skipper Gilchrist hammered 32 off 19 balls while Symonds returned undefeated on 53 off 24 balls.

Deccan Chargers still have to do a lot more to catch up in their remaining league matches if they are to secure a place in the semifinals. The victory over Royal Challengers Bangalore should give them heart and confidence but they would be needed to play out of their skin to make it to the last four.

Gilchrist seemed to have a plan in mind when he elected to field after winning the toss. The ball was doing a bit and it was not easy hitting across the line. Even the likes of Jacques Kallis and Rahul Dravid, both master tacticians, were finding in difficult to force in the initial overs.

Left-arm spinner Pragyan Ojha foxed Dravid in the air to have him caught at point while the ball with which he trapped Robin Uthappa plumb in front had held its line. Both these blows had put the Challengers on the back foot and Virat Kohli, one of the most promising youngsters in India, walked in at a very difficult time.

By losing three quick wickets Royal Challengers Bangalore had slumped to 68 for four in 10.1 overs and appeared in disarray. At this point it looked quite unlikely of them getting any where close to 150.

Kohli took his time in settling down before unleashing the kind of strokes that would have made any power hitter proud. He was particularly severe to Symonds, bowling medium pace instead of spin.

Kallis, the leading scorer in the IPL-3, extended his spectacular form and along with Kohli shared a 95-run fifth wicket partnership that enlivened the proceedings much to the delight of the home crowd. 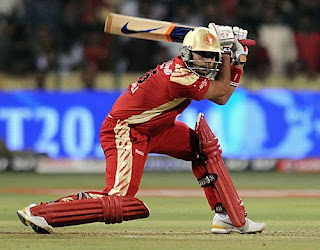 Kohli was dismissed in the final over after blasting 58 off just 35 balls while Kallis had departed in the previous over after hammering 68 off 44 balls. The death overs yielded far too many runs to lift the Royal Challengers Bangalore total to 184 for six.

Chasing a mammoth 185, Deccan Chargers lost Monish Mishra, playing in place of V V S Laxman, early. But Gilchrist and Suman put them on road to victory with a 77-run second wicket partnership.

The match opened again when Gilchrist and Rohit Sharma fell in the span of seven runs but Symonds and Suman took charge and they had no problems in knocking off the runs although needed 60 were needed off last five overs. readmore »»