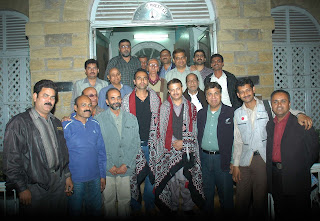 As they say many great things happen by chance. Ehsan Qureshi and I had an appointment with hockey stalwart Sohail Abbas and we were preparing to leave for his residence.

Just before packing up Ehsan telephoned Sohail who picked up the call while having some spicy stuff in the nearby Burns Road whose dishes are famous worldwide for the taste and variety.

Sohail, who holds the world record of scoring the highest number of goals in international matches, promptly agreed to the idea of having our meeting at the Karachi Press Club that’s hardly 10-minute drive from the Food Street where he was dining with his friend.

Chess champion Mahmood Ahmed Lodhi and one of the respected media personalities, Ibrahim Khan, was with us when we decided to reschedule the venue of our meeting with Sohail and neither of them could muster the courage to turn down our unexpected request of accompanying us to the Press Club.

We had only 10 minutes at our disposal because that was the time Sohail needed to reach there. In this period I called Alauddin Khanzada, more famous as A H Khanzada, Honorary Secretary, Karachi Press Club, to make quick arrangements. He consumed probably less time than Sohail takes for hitting a short corner in giving his consent.

As the luck would have it our car and that of Sohail arrived the Press Club around the same time. The hockey legend and the chess champion were accorded the respect and protocol they thoroughly deserved.

The members of the Press Club present on the occasion were thrilled to meet two of the leading sportsmen of the country. The informal session in the dining room was followed by a formal presentation ceremony in the Committee Room upstairs.

It was quite extraordinary how swiftly A H Khanzada had made the arrangements. Quite a few senior journalists, office bearers of the club and the Karachi Union of Journalists sat around the two sports icons.

Sports is not been the beat or forte of A H Khanzada but the manner in which he introduced both the sporting legends reflected his depth of general knowledge. In his welcome speech he showered them with praise for their accomplishments. 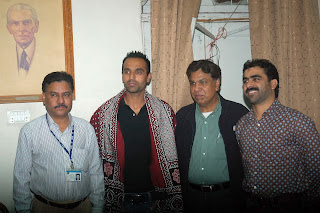 On behalf of the Karachi Press Club he wished the national hockey team the best of luck in the upcoming World Cup Tournament to be held in New Delhi from February 28. He expressed the hope that Sohail will reproduce his Midas touch to win the laurels for the country.

A H Khanzada also appreciated the achievements of International Master Mahmood in the field of chess, congratulating him on being the national champion for a record number of times.

Veteran sports journalist, A.Majid Khan, presented the Ajrak, a traditional gift from the people of Sindh, to Sohail Abbas while another seasoned journalist, Arshad Shami, did the honours to Mahmood Lodhi.

Both Sohail Abbas and Mahmood Lodhi acknowledged the recognition from the Karachi Press Club and they looked forward to the support of the media in accomplishing the mutual objective of promoting sporting culture in the society. readmore »» 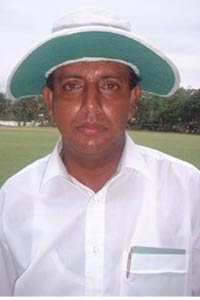 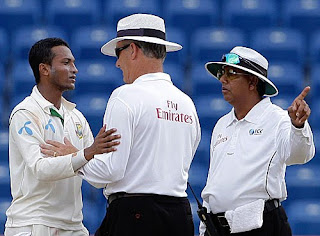 Australia’s Darrell Hair performed duties in 139 ODIs with Pakistan’s Aleem Dar not very far behind having umpired in 127 one-dayers. Russell Tiffin of Zimbabwe (111), David Orchard of South Africa (107) and Steve Dunn of New Zealand (100) had also completed century of ODIs as an umpire before de Silva did it earlier this year. readmore »»