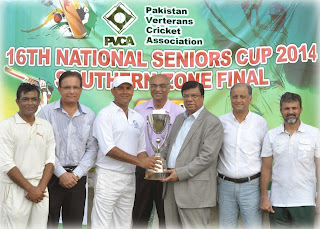 Put into bat, Moin Khan Academy was bowled out for 199 in 28 overs. Set to score 200 in 30 overs, Omar Associates raced to the target in 24.3 overs with seven wickets in hand. Omar Associates will now take on the regional champions of the northern zone in the national final to be staged at the Qaddafi Stadium, Lahore.

Sajid Ali’s undefeated 93 off 74 balls containing 15 fours guided Omar Associates to a convincing victory with Nadeem Shaikh making a breezy 33 off 18 balls with the help of one six and six fours and Azhar Khan remaining unbeaten on 33 off 30 balls, hitting two sixes and one four as the winning runs with 5.3 overs to spare.

Alamgir Ahmed, on behalf of the Sindh Seniors Welfare Association, distributed cheques of Rs 75,000 each to the deserving beneficiaries, Mohammad Hanif, a veteran player from Badin, and Arif Ali, a local umpire, while Wasimuddin, another umpires, received Rs 100,000.