Yet another unimpressive series win for India

It were the rains, for a change, that allowed India to clinch the ODI series in the Caribbean. Although India were in the driving seat when the torrential downpour brought an early end to the fourth and final one-dayer in St Lucia but going by their past record they could have easily lost the focus and settled for a drawn series. 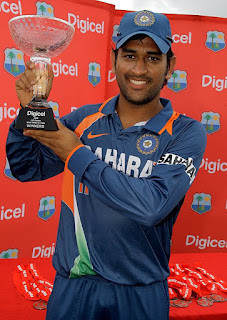 It’s not often when the rains have brought joys in the Indian camp but after having watched them surrender in the second game at the Sabina Park, the rainy weather of St Lucia certainly seemed to have proved a blessing in disguise for them.

The Indians had landed in the Caribbean soon after their miserable campaign in the ICC World Twenty20 in England where they had not only been dethroned but also humiliated in a most disgracing fashion.

Mahendra Singh Dhoni and his boys had very little time to regroup after the debacle in England but they were still the overwhelming favourites to prevail over the West Indies, who had gone on to reach the semifinals of the World Twenty20 event against all odds.

The Indians had arrived in the Caribbean with even bigger reputation in the past but failed to deliver with the 2007 World Cup being their worst outing in a major competition for quite sometime. They had fared miserably in the ODI series there in 2006 as well even though they were in possession of a formidable outfit under the command of Rahul Dravid.

The Indian fans, therefore, must not have taken anything for granted when Dhoni, a known aggressor, arrived with a very strong combination at his disposal. They knew that they would have greater pains to endure if they were to expect the Indians to translate their dominance into emphatic wins.

Yuvraj Singh’s dazzling knock in the first game gladdened their hearts even though the heartbeats must have stopped occasionally when the West Indians, more famous for choking under pressure than bringing about heroics, came perilously close to the Indian total.

The second game of the series was yet another classic example of India’s self destruction. As we have seen so many times in the past the ordinary mortals came up with the performance of their lifetime against India. It was the turn of Ravi Rampaul to steal the limelight at the expense of the fancied Indians.

After watching the events of the second ODI at the Sabina Park one had become completely unsure which way the series would be going. Nothing could have been ruled out if the Indians decided to play for fun and not for glory. 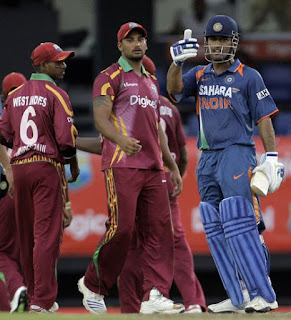 The Indians were in complete command of the situation in the third one-dayer at St Lucia that was hit by the weather but their supporters didn’t know until Dhoni struck a six in the final over if they would actually win the contest. One would not have been little surprised if India lost because they have had this rare quality of throwing it away when least expected to do so.

The Indians got off to a flying start in the fourth and final game too with Ishant Sharma producing lethal deliveries first to unsettle and then to remove Chris Gayle for a duck. Ashish Nehra was also bowling very well from the other end and the West Indian batsmen were barely surviving before the rains came to halt the action.