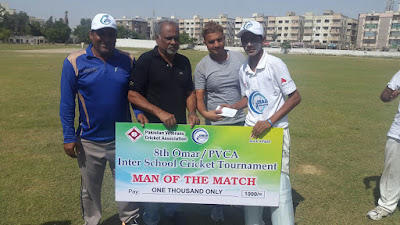 Beaconhouse School extended their brilliant form to outclass Fahim School System after having bowled them out for 114 in 28.3 overs despite Saadi Ahmed’s 67 off 79 balls.

The Beaconhouse School spinners turned the tables after Fahim School System appeared poised to post a competitive total. Off-spinner Shayan Haider ran through the lower-order by picking up three wickets for only four runs in a spell of 4.3 overs while the earlier damage was caused by leg-spinner Maaz Bin Salman (2-18) and left-arm spinner Abdullah Masood (2-38).

Beaconhouse School, who needed 115 for victory in 40 overs, got off to a whirlwind start and the openers raced to the target in a matter of just 7.3 overs. Ammar Iqbal, adjudged Man of the Match, remained undefeated on 83 off 32 balls with the help of two sixes and 13 fours while his partner Haris Ali struck four boundaries in his undefeated 23 off 14 balls.

Hira Foundation School and B M Grammar School were engaged in a dramatic match. Electing to bat, after calling correctly, B M Grammar School was skittled for 90 in 23.4 overs despite the contribution of 41 extras as three of their top five batsmen were run out and the lower-order was rocked by the spin duo of Malik Zain (3-20) and Ahmed Talal (2-10).

Chasing what looked like a modest target of 91 in 40 overs, Hira Foundation School appeared in a state of bother at 60 for five. They were taken over the line by Man of the Match Zain Anwar, who returned unconquered on 48 off 55 balls. He received support from Sohail Khan, who contributed 10 in the match winning 34-run unbroken sixth wicket stand as the victory was achieved with nearly 20 overs to spare.

Batting first, Foundation Public School was all out for 148 in 34.5 overs with Mr Extras making the biggest contribution of 54, inclusive of 49 wides. Arsham Najam (19 off 25 balls) was the topscorer as the innings was wrecked by leg-spinner Mohammad Shahzad (3-25) and medium-pacer Mohammad Arif (2-31).

Behbud Secondary School, in pursuit of a target of 149 in 40 overs, lost three quick wickets after opener Farhan Sadiq (26 off 19 balls) had kickstarted the chase. The 69-run fourth wicket stand Mohammad Arif and Haider Ali, however, took them to victory quite comfortably in the end with 12.3 overs in hand.

Haider Ali was dismissed after scoring 30 off 48 balls with the help of four boundaries but Mohammad Arif, declared Man of the Match, remained unbeaten on 55 off 66 balls, hitting six fours.
readmore »»