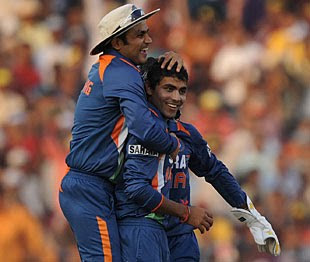 The capacity crowd at the Barabati Stadium in Cuttack on December 21 had the pleasure of watching the home side register a rare comeback win in any form of the game. More often than not it are the Indians themselves who let the initiative slip after being in a firm control. But for a change this time they had the Sri Lankans slide after an explosive start.

Virender Sehwag led the team admirably in place of regular skipper Mahendra Singh Dhoni who had to sit out of the game due to the ban imposed by the ICC. It was in the fitness of things that the acting captain himself provided the breakthrough that turned the tide decisivly in India’s favour.

The Sri Lankans were marching on, taking full advantage of some wayward bowling and the usual sloppy fielding by the hosts. Sehwag deceived his opposite number, Kamar Sangakkara, in flight and even the fumbling Dinesh Karthik was able to complete the stumping.

It’s quite extraordinary how these Indian youngsters make so many fumbles in the field that make the task even more difficult for their bowlers on flat pitches. Karthik, keeping wickets in the absence of Dhoni, was earlier guilty of having made a mess of a run out. He very nearly let that stumping chance go abegging but Sangakkara had danced down the wicket far too ahead to return to the crease.

Karthik was again in focus for the wrong reasons when he failed to hold on to a catch running backwards when Mahela Jayawardene miscued a sweep. Any athletic and alert wicketkeeper at the international level would have grabbed that opportunity.

The Indian bowlers didn’t lose heart with the lack of support from their own fielders and there was no escape route for their opponents. It was a maginficent effort to have bowled out Sri Lanka, scoring at better than run a ball in first 30 overs, for 239 in the 45th over. At 165 for one in the 23rd over they were looking on course of a total far too big.

"With the kind of start they got, I was praying they wouldn't get 350 or 400 on the board. But we were constantly looking to take wickets and Ashish Nehra did a fantastic job during the Powerplay. The credit for this victory ought to go to the bowlers, especially Harbhajan Singh] and Ravindra Jadeja. The wicket was slow and it kept low at times and it helped the spinners a bit,” Sehwag acknowledged. 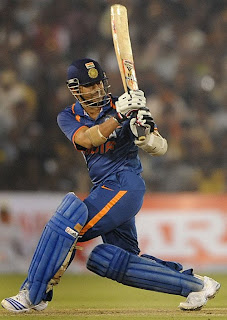 "My job is to give the team a good start and score as many as I can. I was in good form and I utilised the first 10 overs very well. Sachin Tendulkar then played right through the innings and ensured we won. Overall, this was an excellent team performance,” he commented.

After the cracking start provided by Sehwag, Tendulkar remained undefeated on 96 as India romped home in the 43rd over with seven wickets in hand. Although he missed a hundred but his knock was much more significant being a match-winning effort.

The Man of the Match award, very rightly, was secured by the promising left-arm spinner Jadeja who returned his career-best figures in difficult circumstances.
readmore »»