The news has finally broken and the Indian camp has every right to feel shattered. Zaheer Khan, acclaimed as the most complete seam bowler in world cricket, has been ruled out of the remainder of the series against England.

Without him India’s chances of fighting back in the Test series will now be greatly reduced. Although the return of Virender Sehwag for the last two Tests will have boosted their confidence immensely but the loss of Zaheer, the champion left-arm quickie, makes their task even harder if not impossible.

Zaheer, whom his side needed so badly to take care of the new ball, will now be returning to India and will be replaced by left-arm seamer RP Singh.
Zaheer was believed to have picked up a hamstring injury during the first Test at Lord's, but the Board of Control for Cricket in India (BCCI) has now said that he’s not only has a recurring hamstring problem but also a right ankle impingement that will require surgery, followed by a 14-16 week period of rehabilitation.

He had earlier been withdrawn from the squad for India's recent Test series in the West Indies due to a right ankle injury.

Isn’t it funny that the premier fast bowler of the country was made to play in the Indian Premier League (IPL), after having played a lead role in his team’s success in the World Cup? 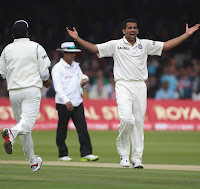 Shouldn’t the officials of the BCCI have discouraged their key players from taking part in every match of the IPL thus risking their immediate future?

With the tours of the West Indies and England round the corner, the movers and shakers of the Indian cricket should not have lost sight of the fact that the excessive workload in the IPL was certain to take its toll on the quicker bowlers in particular.
Zaheer, who was quite enthusiastic and vibrant in the IPL, became a liability for the national team right after his return. He had fitness problems from the day one of the England series. In fact he had pulled up midway through his 14th over in the first innings at Lord's.

Wasn’t it a shame that the best bowler of the team was sidelined on the very first day of the series? He was the bowler who held the key to India’s chances was very unlikely to take any further part on the tour although the official statements tried to conceal the facts.

The BCCI functionaries were probably shy of declaring it right away what they have done now. They didn’t desire to get the discredit therefore stories of all sorts were planted to twist the matter.

It was a joke expecting him to bowl again during the first Test, as it was being indicated in official reports. There were reports about his return for second Test that there was hardly any substance in it.
With a bigger gap after the second Test, there were thoughts that he might stage a come back in the third Test but he only got through three overs in warm-up match in Northampton and he has now finally been pulled out of the squad.
readmore »»