Golden Eagles and SPM Stags stormed into the Punjab regional final of the 16th National Seniors Cup Cricket Tournament 2014 as they overwhelmed Aftab Qarshi XI and Chaudhary Sports respectively in the semifinals at Lahore on May 18. 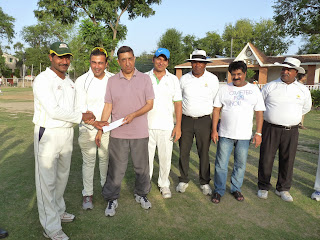 The regional final, between Golden Eagles and SPM Stags, will be played on May 25 and its winners will take on the southern region champions, Omar Associates, in the final on June 1.

The event is being jointly sponsored by Arif Habib Corporation Limited and Omar Associates (Pvt) Limited.

Golden Eagles reached the target of 229 for the loss of four wickets in 26.2 overs as Mohammad Shahbaz led the victory charge with a polished knock of 108 containing a six and 18 fours. Shahid Anwar (41), Naseer Ahmad (37), Salman Khan (16) and Nadeem Farooqi (17 not out) also contributed their bit while Aftab Qarshi, Tahir Saeed and Mohsin Aftab were the successful bowlers for Aftab Qarshi XI.