India need Dravid at his best in South Africa

The Indian think-tank has made the right decision by persisting with Rahul Dravid, despite him not being in the best of form for quite sometime now. Obviously the selectors were under greater pressure in the home series against New Zealand as they resisted the temptation of replacing the shaking ‘Wall’ or even changing his position in the batting order.

Dravid did respond with a couple of centuries against the Black Caps, after having endured a barren period quite long by his own high standards, but his real test will obviously come in the upcoming series against South Africa.

I think Dravid will help the Indian cause much better on the bouncy pitches of South Africa where any youngster, no matter how capable, would have struggled playing their first time.
The Indians will be at a huge advantage if he does find his form there but he’s the one batsman who can make the difference between winning and losing in those conditions where the ball will be doing quite a lot.

Dravid’s form may still be a cause of concern to many but his skills are proven and his capacity for a big innings under pressure is probably second to none in the business, Sachin Tendulkar and VVS Laxman included.

The Indian captain, Mahendra Singh Dhoni, had paid rich tribute to Dravid whose innings of 191 played a pivotal role in guiding the hosts to a convincing victory over New Zealand in the third and final Test at Nagpur.
"Rahul (Dravid), batting at No. 3, gives us the stability. Viru (Virender Sehwag) plays aggressive cricket and gives us momentum. After that, it is the responsibility of Rahul and Sachin (Tendulkar] coming at No. 3 and 4 to give that stability to the innings, based on which the lower order can also contribute,” the triumphant skipper had remarked in the post match press conference at Nagpur.

India could have got away with it even if Dravid was not there in the home series against New Zealand but they would need his genius on that demanding tour of South Africa where the ball is more likely to fly rather than stay low.

The promising young batsmen like Suresh Raina and Rohit Sharma have done well on pitches where the ball didn’t bounce much. They have often been found wanting when the ball was moved or bounced.

Virender Sehwag and Gautam Gambhir are two exceptionally talented opening batsmen who can score briskly on all kind of surfaces. Their skills and temperament will be tested by the South African speed merchants with the new ball.
Dravid’s forte is blunting the fiercest of attacks. His reflexes might have slowed down of late but he still possesses the technique to stand in the middle for a long time. He has had problems in negotiating the ball leaving him in the recent past but he has the experience to cope with the most awkward of deliveries.

He has played in South Africa quite a few times and now it’s the time for him to come good again. Another successful series could extend his career by at least a couple of more years.
readmore »» 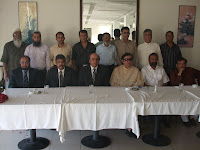 The first tenure of Alamgir Shaikh wasn’t a magical one as he had inherited some major problems with the financial side being the obvious weak link. He has weathered the storm somehow but his skills at the top will be tested further in the coming years with a lot of challenges to be met.
readmore »»