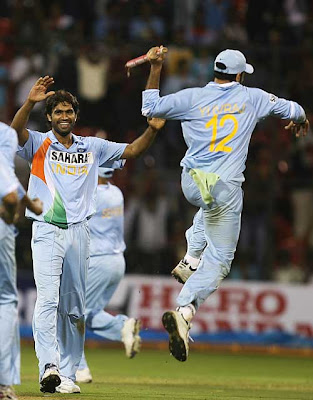 The Indians have sealed the seven-match ODI series against England by winning the fourth game in Bangalore. It’s not often that India have won four matches on a trot, let alone doing it during the course of a series.

The lads are making the most of the experience they have gained by playing the Indian Premier League (IPL) last season. The super-fit Indians are proving just too much for the England side lacking in class and character.

Manhendra Singh Dhoni is in the process of enhancing his reputation every day. He has turned out to be a great captain who passes the impression of having full faith in the ability of his teammates.

The boys, as well as the men in the squad, continue to deliver with smiles on their faces. The body language says it all. Their shoulders never drop even when they are being taken for runs or suffer a batting collapse. They have a settled team now that has the potential and eagerness to rule the world.

But it looks as if the Indian cricket administrators are getting ready to induct some players who have not played in the ongoing ODI series. It very clearly means that some of those players having performed exceptionally well in the earlier games will be made to sit out.

This policy could backfire because they would be taking the risk of disturbing the combination that has been clicking as a unit. One is not sure if the changes would be made to accommodate some players and please the office-bearers of their respective state associations.

Compromising on the interests of the team doesn’t sound a noble idea. The players who are delivering need not be rested unnecessarily. The inconsistency in the Indian selection can provide the window of opportunity to England who have been laid low by a highly motivated and proactive unit.

One fails to understand the wisdom behind derailing the winning combination. The changes should only be made when somebody is not fit to play or he is having a lean time in the middle. Dropping the high performers in order to accommodate some of the fringe players doesn’t make much sense.

The Indians should have learnt from history. In the past they have often been guilty of experimenting just a bit too much at home that has allowed the visiting teams to stage a comeback from nowhere.

Will England be the latest beneficiary of such a move we will have to wait and see. There is still a possibility that the Indian selectors may continue fielding more or less the same team in the remaining games to attempt a whitewash in the series.

But if the selectors are pressurized by the concerned quarters and some unnecessary mare changes are made the 4-0 scoreline could very well become 4-3 in a matter of the next few days.The momentum is with India. They have dominated the first four games decisively and the series has been pocketed. The big question however is: Will their selectors succumb to the pressures of some of their own people or better sense will prevail?