Yusuf Pathan makes himself a certainty for World Cup squad

There has never been any doubt about the exceptional talents of Yusuf Pathan both with the bat as well as the ball. But there were question marks about his ability to handle the pressures of international matches in the limited opportunities having come his way in an era when the Indian selectors have far too many choices than their predecessors. 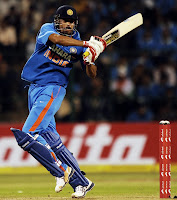 Yusuf had done it in the domestic tournaments and besides having showcased his unmatched potential in the Indian Premier League (IPL). But he needed to prove himself in the international arena.

The moment has come for the enterprising all-rounder. He made the most of the opportunity he got in the fourth One-day International of the recently concluded home series against New Zealand in Bangalore. He produced the kind of all-round performance that would have made even the legends proud.

He followed his three-wicket haul with an unbeaten century under pressure to lead India’s turnaround after the home side, chasing a mammoth total of 316, had lost its top order much more quickly than anticipated generally. 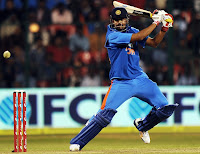 It was a day to remember for Yusuf. He was given a longer bowler, although yet not his qouta of 10 overs, but he still managed to pick up three wicket without conceding too many runs when the visitors came up with their best batting performance of the series.

Yusuf carried the confidence into his batting and I am not sure what exactly was in the mind of the caretaker captain, Gautam Gambhir, promoted him in the order. He was supposed to bat at number seven but the skipper sent him in with his side was reeling at 108 for four in the 21st over with more than 200 still needed.
It was a pressure-cooker situation as far as the hosts were concerned and besides talents and skills one needed a cool head to get going. Nobody would have dared asking a regular number six if he failed to deliver but Yusuf’s career was at stake here. He needed to perform or forget about his place in the team at least for quite sometime. 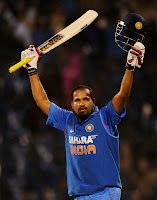 The additional burden brought the best of Yusuf and he proved the point. Dead rubber it was for India but literally it was a matter of life and death for the enterprising all-rounder who didn’t let the chance go.
His match-winning unbeaten hundred (123 off 96 balls) could well be the turning point of his life and career. In the short run he becomes an automatic choice for the World Cup while in the long run he should be a permanent member of the Indian side for quite sometime not entirely on the basis of just one outstanding effort but his extraordinary talents that have already been unfolded.
"I had enough overs in hand, and I sensed an opportunity to play a long innings. With Rohit (Sharma) and Saurabh (Tiwary) we rotated the strike well and kept in touch with the run-rate. At no stage did I feel we were going to lose the game,” he remarked after leading India to triumph.

"At the rain break, Gautam (Gambhir) told me to utilise the Powerplay to good effect. He advised me not to throw my wicket away, and said if I stayed in the middle till the end, I would win the match for India. I am glad I proved him right," Yusuf recalled.

"I don't change my natural game. But of late, I am trying to spend some time in the middle before going for my strokes. But if there is an opportunity to hit the ball, I will not hesitate to do so,” he added with a smile on his face.
readmore »»