It’s very difficult to comment on any sporting contest that’s under the cloud of the outside factors. India, not for the first time, fared so miserably to keep their underdogs opponents, New Zealand, interested until the end. The Napier Test of the 2008-09 series turned out to be another occasion where the logic was defied. An element of uncertainty had come into the game even before the first ball was bowled. Hardly did anyone know until the toss that the Indian skipper Mahendra Singh Dhoni was unfit for the game.

Dhoni’s pullout from the game at the eleventh hour was mysterious. The mystery grew into suspicion when acting captain Virender Sehwag allowed New Zealand to post a total in the excess of 600 after having rattled their top-order in the first hour.

It was simply amazing. The most lethal new-ball attack of the world was blunted by a few young cavaliers who treated them disdainfully. One of the best off-spinners of the game looked like a pedestrian while the support bowlers appeared novices.

The team that was the firm favourite to close the series at the McLean Park, after having pocketed the previous Test so emphatically, was in shambles all of a sudden. The outfit that should have actually dictated terms was at the receiving end instead.

By letting New Zealand post a gigantic total, India had probably ensured that they should not be chasing another win in this game. With the pitch as flat as you can expect and the outfield lightening quick and the boundaries far too short, India had the guns to surpass the total of 619 if they so desired.

They collapsed quite dramatically in their first innings to make absolutely sure that a victory for them went out of the equation. There were only results possible once Daniel Vettori had enforced follow-on. The Indians could have either lost the game or at best they could have gone for a draw.

There was nothing in the pitch for the bowlers and the Indians themselves proved it by playing out 180 overs in their second innings losing only four wickets in the process, two of them to horribly wrong umpiring decisions. Rahul David was given out caught when the ball had only touched his pads while Gautam Gambhir was declared leg before on a ball going well down the leg side.

The Indians occupied the crease for more than two days in their second outing against a New Zealand attack that was enthusiastic and disciplined without ever looking threatening.

Gambir and VVS Laxman scored centuries in contrasting styles while there were half centuries for Dravid, Sachin Tendulkar and Yuvraj Singh. The only man, having failed to deliver in both innings, was none other than Sehwag. 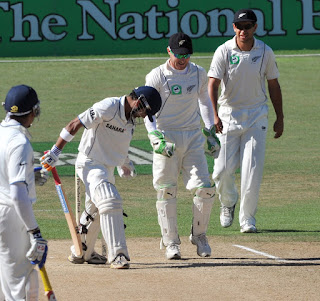 Why the Indians didn’t show application in their first innings in ideal batting conditions is a million-dollar question? Was it necessary to keep the home side excited and interested until the final session of the game?

Isn’t it a shame that the most powerful batting line-up of the world was dominated by an ordinary bowling attack for the best part of three days? The world-beaters are not expected to play like this. That was quite uncharacteristic of a team that is rated as the most balanced as well as the strongest of all outfits in the business.
readmore »»