South Africa, India most likely to rule cricket world in 2009 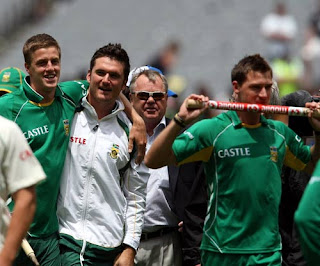 The curtain has fallen to the year 2008 and a new year, 2009, has dawned. This could be a year where changes in the world cricket rankings at the top look imminent. In other words the world order of cricket is to be revised. This may happen very quickly too.

South Africa, the most consistent of all Test teams in 2008, appear on verge of displacing Australia from the top of the tree. It could happen as early as the first week of the year because on current form South Africa are the favourites to roll over the Aussies in the third and final Test at Sydney.

South Africa, after having triumphed in 11 of the 15 Tests in 2008, certainly deserve to be crowned as the new leaders. They established total supremacy over Australia in the first two Tests and there seems no why they should not be completing a whitewash at Sydney.

A combination of factors has stretched Australia and it seems a matter of time before they surrender the position they have held for so many years. They have lost the cutting edge in the bowling department with the simultaneous exit of Glenn McGrath and Shane Warne, two of the greatest bowlers of the game. The retirement of Adam Gilchrist, the most destructive wicketkeeper-batsman, destabilized their batting.

Great cricketers like McGrath, Warne and Gilchrist are born after decades if not centuries. Obviously the Australian line-up lacks the power to knockout the opponents in their non-presence.

The departure of Warne in particular has hurt Australia deeply. Hailed as the greatest spin bowler of all time, he had the rare ability of winning matches on his own on any kind of surface. He foxed the batsmen and created the kind of pressure that used to demoralize the best of teams.

While Australia have lost three of its legendary cricketers, a couple of teams have improved in leaps and bounds during the same period. South Africa and India have emerged on the scene as the most powerful outfits. Lately they have proved too good for Australia as well.

Ricky Ponting now finds life difficult because teams like South Africa and India have greater self-belief and resilience as we have witnessed during the past few months. Another team that could also punish Australia is Sri Lanka with two ‘magical’ spinners in their ranks.

Unlike South Africa and India, Sri Lanka don’t possess a particularly potent pace attack an area they need to work on if they have to come good on hard and bouncy pitches. 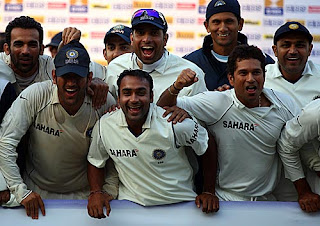 South Africa hold the advantage in the fast bowling department with their spearhead Dale Steyn, in terrific form, enjoying the support of the likes of Makhaya Ntini, Morne Morkel and Jacques Kallis. Paul Harris may not be a match-winning spinner yet but he complements the pace battery with his ability to dry up the runs.

India have the most balanced bowling attack in world cricket at the moment and the variety allows skipper Mahendra Singh Dhoni to work on different options. With explosive openers Virender Sehwag and Gautam Gambhir in the middle of a purple match India would be expected to win Test matches more regularly abroad than ever before.

So South Africa and India are the two teams looking ahead to the immediate future with great hopes. Australia may be forced to bring in some more new faces while Sri Lanka would be searching for a couple of quality fast bowlers strong enough to carry the burden at the international level.

England enjoyed slightly better record than Australia in 2008 but they could still face an uphill task as far as recapturing the Ashes is concerned. The traditional rivals had a great series in the summer of 2005 and we can witness some tense battles this summer too.

New Zealand and the West Indies continue to be in the phase of transition and they keep struggling in finding a trustworthy combination. Too much experimentation in both these teams has not helped their cause either.

Pakistan, unfortunately, didn’t get an opportunity to play a Test match in 2008 but hopefully they will not long to make their presence felt once they re-enter the scene in early 2009.