Gulzar, Sarfaraz shine Down Under 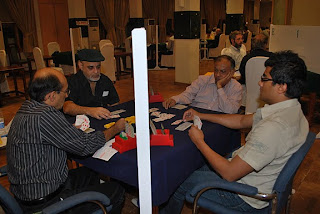 Two of Pakistan’s top players, Gulzar Bilal and Sarfaraz Ahmed Khan, have returned home after having performed impressively in the recently concluded 2010 Canberra Summer Festival of Bridge staged in the Australia capital.

Their superb performance came around the same time when Pakistan’s cricket team was being blanked by the Aussies. Remember Pakistan were beaten in every Test match and One-day International besides the one-off Twenty20 International during their most unforgettable cricket tour ever.

It was very gladdening to find Gulzar and Sarfaraz, members of the reigning national champions in Pakistan, combining brilliantly with the Australians to make it to the semifinals of the team championship where they went down fighting to a spirited local outfit.

Teaming up with the Aussie trio of Seamus Browne, Khokhan Bagchi and Michael Smart, they finished fourth among 178 participating teams in the mega event held under the auspices of the Australian Bridge Federation (ABF).

The tournament, held at the Canberra’s National Convention Centre every year, is regarded as the biggest bridge event in the Australian calendar with many of the international bridge stars participating.

The 2010 edition brought the summer festival into the electronic age of bridge with the introduction of bridgemates in all events. The innovation allowed the players to see contracts, leads and results of boards from all other tables and matches. Each table was equipped with an electronic unit that was user-friendly for the participants as well. 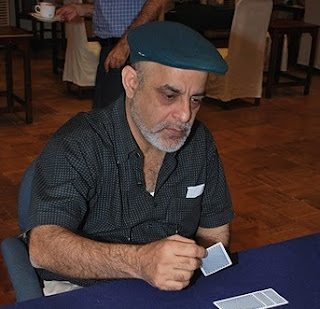 In the semifinals the eventual champions De Livera had prevailed over Lilley, containing
D Lilley, Z Nagy, B Haughie, A Braithwaite, N Griffiths and J Williams, 142-116. De Livera took the first round 50-32 while their opponents grabbed the next one 44-25. They, however, ensured their passage into the final by winning the last two rounds 24-16, 43-24.

Milne outplayed Bilal, having Gulzal Bilal, Sarafraz Khan, Seamus Browne, Khokhan Bagchi and Michael Smart, in the other semfinal 145-77. Milne emerged triumphant in the first three rounds with the scores of 38-27, 64-11, 20-6 to gain an unassailable lead. Bilal had the consolation of winning the fourth round 33-23 that could only reduce the margin of their defeat.

Both Gulzar and Sarfaraz, two of the leading bridge players of the country, were very happy with their recent performance in Australia and they hoped to do even better in future.

“Yes it was very frightening to bear the agony of defeat after defeat of our cricketers at the same time when we were focusing hard on doing well on the table. Away from the bridge table as well the horrible performance of Pakistan’s cricket team was a much talked about subject in the social gatherings,” Sarfaraz recalled. readmore »»
Links to this post