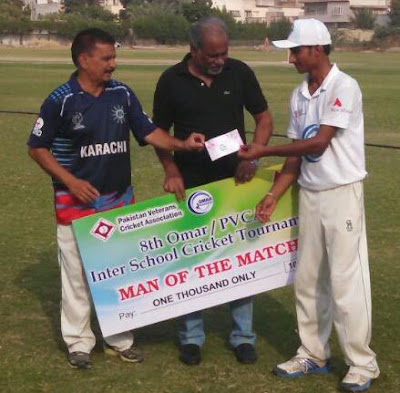 Saif-ul-Haq, adjudged Man of the Match, scored an even hundred which took the Kamran Public School total to an imposing 282 for six in the allotted 40 overs. In reply Falcon House Grammar School was bowled out for 150 in 36 overs.

Electing to bat, after winning the toss, Kamran Public School was provided an enterprising start by Hashir Ansari (23 off 12 balls) and Hasan Jafri (21 off 18 balls) as there were flurry of boundaries in the 56-run opening partnership.

Coming in at number four, Saif-ul-Haq sustained the momentum until the end of innings, finishing with an unbeaten 100 off 92 balls with the help of 10 fours. He was ably supported by Abdul Moiz (34 off 29 balls), Aliyan Mahmood (29 off 47 balls) and Ali Hasan (23 off 43 balls).

Off-spinner Affan-ur-Rahman (2-26) and medium-pacer Nafay Yar Khan (2-53) were the successful bowlers for Falcon House Grammar School who didn’t help their cause by sending down 40 wides during the innings.

Chasing a formidable target of 283 in 40 overs, Falcon House Grammar School wilted under the scoreboard pressure. Opener Sikander Ali Khan (37 off 48 balls) and Mohammad Mutawakkil (25 off 53 balls) contributed substantially but they also couldn’t force the pace.

The clinical bowling performance of Kamran Public School conjured a resounding win for their side. Medium-pacers Hammad Ahmed and Anas Ilyas set the tone by picking early wickets with the new ball and the issue was wrapped up by the spin trio of Mohammad Ovais (4-35), Ubaidullah Khan (2-14) and Ali Hasan (2-20).
readmore »»