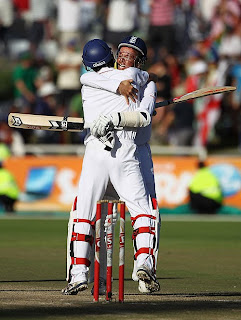 The present England side led by Andrew Strauss demonstrated once more the virtues of commitment and determination. For the third time in eight Tests they managed to save the game with the skin of their teeth.

England don’t have too many flamboyant characters at the moment who could take the fight to the opponents but they are certainly blessed with iron-willed individuals whose never-say-die approach is truly inspirational.

When you have the likes of Paul Collingwood in your ranks you can be rest assured that the team would not go down without fighting. Not surprisingly Collingwood has been instrumental in saving all the three Tests that have gone to the wire. His level of concentration and the ability to withstand the pressures have served the England cause immensely in the recent times.

Cricket is obviously a team game and Collingwood alone cannot be expected to the job. The credit must also be given to their captain Strauss for having kept his boys motivated all along. It’s a tougher job to give your best when the chips are down and strong leadership skills are needed to get the best out of the teammates.

Strauss, as I have emphasized on many questions, is the man for the job. He has been chiefly responsibly for turning it around for England despite not being in possession of a world-beating unit. He has provided a classic example of doing his best with the available resources.

England can now look forward to the fourth and final Test with high hopes of pocketing the series. They have retained the one-nil lead meaning they can’t lose the series even if South Africa bounce back to end the series on a winning note.
Graham Onions has been England’s batting hero in two of the last three Tests.

Although fast bowling is his forte and he comes in to bat at number eleven he has shown the reslience that would make even the seasoned batsmen proud.
Mind you it’s not easy negotiating the deliveries when surrounded by so many fieldsmen and the bowlers going for the kill. It tests the technique of the greatest of batsmen when they are pushed into that situation. 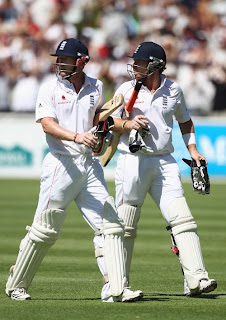 Number 10 and 11, James Anderson and Monty Panesar, had saved a Test match against Australia in Cardiff last summer. The great escape had lifted the morale of the home team and they went on to regain the Ashes.

Onions has now done it two times. Like the first Test of the ongoing series he had the responsibility of seeing off the last six deliveries of the match. On both occasions he came up trumps.

South Africa were earlier frustrated by the pair of Ian Bell and Paul Collingwood who batted for well over four hours on the fifth and final day. Their 112-run partnership lasted no less than 57 overs and as Graeme Smith found out once more it was broken just too late to force the issue.