Jalaluddin being victimized by PCB once more

Former Test fast bowler, Jalaluddin, is not new to victimization or injustices. He and his department, Pakistan Customs, have been at the receiving end on the numerous occasions in the past as well.

Jalaluddin’s career as a fast bowler was cut short due to non-cricketing reasons. He wasn’t provided the opportunity to do justice to his talents even after having stolen the limelight by becoming the first bowler to perform a hat-trick in One-day Internationals.

He has learnt to live the hard way. Instead of feeling disheartened or demoralized he has continued to work with fierce determination. Despite the obstacles he has been in the thick of things. His Customs Cricket Academy (CCA) is a living example of his dedication and commitment.

By sheer hard work he has managed to become the most sought after cricket coach of the country. He has been given odd assignments but he has not yet been granted the recognition he deserves.

Lately he is crossing swords with the Pakistan Cricket Board (PCB) over the issue of departmental representation. He has accused the PCB officials of wrongdoings while blocking his election in their Governing Board.

Speaking in a hurriedly called press conference at Karachi’s Days Inn Hotel on January 14, Jalaluddin alleged that his department, Pakistan Customs, as well as Sui Southern Gas Company Limited (SSGCL), were intentionally kept out of the PCB to be held in Lahore the following day (January 15).

Jalaluddin, verifying his claims by documentary evidence, asserted that he had already been elected as the representative of the departments to the Governing Board of the PCB, following the expiry of the tenure of the previous member, Abdul Raqeeb of HBL, who is currently accompanying the national cricket team as manager on the tour of Australia. 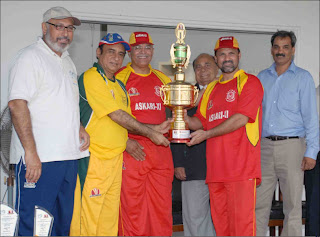 “There were nine departments who held the voting rights. Five of them, NBP, SNGPL, Pakistan Customs, SSGCL and KRL, issued letters to vote for me. Therefore I was elected to be the representative of the departments in the Governing Board of the PCB by virtue of having the support of the majority of them,” Jalaluddin stated while circulating the copies of the letters of the concerned departments to this effect.

“Instead of accepting the verdict of the departments, some elements in the PCB began conspiring against me for reasons not known to me yet. Even members of the Governing Board, whose tenure has already expired last November, started played dirty game with me and they also persuaded the Chairman of the PCB, Ijaz Butt, to be a part of this campaign,” he contended.

“When I was already nominated as their representative by the majority of the nine departments there was no logic whatsoever in convening a meeting to hold the elections in which my own department has not even be invited,” he complained.

Jalaluddin has approached the Federal Secretary of Sports, Anis-ul-Hasnain Musavi and the Chairman of the National Assembly Standing Committee on Sports, Jamshed Dastti, to intervene in the matter and ensure justice with him. readmore »»