The score of 136 for nine in 38.1 overs reflects complete dominance of the bowling side. But it wasn’t exactly the case on the opening day of the first Test between South Africa and India at the Super Sport Park in Centurion on December 16. 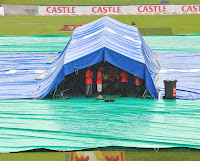 India finished the shortened day’s proceedings with an inadequate score but it wasn’t shameful batting performance by any means in conditions tailor-made for the home bowlers. None of their top-order batsmen were guilty of throwing away their wicket while trying anything silly or adventurous. Neither was there any indication of lack of application on their part.

On the other hand it was one of those forgettable days when almost everything went against them. It remains to be seen if they will be able to recover from this precarious position. They have the potential to stage a comeback but how quickly their luck would change to let them regroup can’t be predicted.
Everybody, not only the experts, knew about the weather and the pitch. It went to the credit of the ground staff to have made the play possible during the day even after 10 centimeters of rain in morning. The tale of horror began from India right from the beginning. They would have been better off getting no play on the first day in order to let their spearhead Zaheer Khan get some more time to recover and assess his fitness afresh on the second morning.

As it turned out, India had to leave out their most experienced fast bowler when Mahendra Singh Dhoni went to toss. No team would have liked to bat first in such trying conditions and Graeme Smith had no hesitation in inserting the opponents.
Dhoni’s misfortune with the toss is nothing new. He has admitted it so many times that calling correctly is something beyond him. He has made up for his rotten luck with the coin by motivating his team further.

India suffered another blow, the first after the start of the innings, when Virender Sehwag, unquestionably the most destructive batsman in the world, was caught at deep third man for a duck. It’s very rare indeed for someone to be caught in that position and that too so early in the innings. As a matter of fact there’s hardly any fielder in the deep on the off side in the first few overs of a Test match.
The dismissal of Sehwag meant so much in the context of the game. He possessed the skill to score the quickly and his mere presence at the crease would have been heart breaking for the bowlers.

His opening partner, Gautam Gambhir, weathered the storm for a while but he couldn’t stay for long enough. Rahul Dravid was looking very solid but fell to his first error of the day. Sachin Tendulkar counterattacked with purpose but he paid the price of staying on the backfoot to a full pitched delivery he could have driven if standing normally.

With the top six batsmen back in the hut for only 71, skipper Dhoni found an assured partner in Harbhajan Singh who probably played the innings of his career. He looked set for a big score only to be run out in the most cruel of manners, summing up a nightmarish day for his team.
Dale Steyn and Morne Morkel, who were just ordinary in the two-Test series against Pakistan in the United Arab Emirates (UAE), made the most of the lucky breaks to put their side in the driving seat.
readmore »»