Life may not be same for India after Kirsten

What a fascinating sight it was to watch Gary Kirsten, a South African, lifted on their shoulders by the young Indian brigade while celebrating the World Cup triumph at the Wankhede Stadium in Mumbai on April 2! 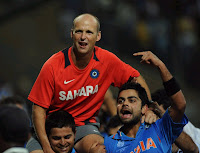 It was a clear reflection of the huge impact Kirsten had made in grooming and trusting the promising youngsters like Virat Kohli and Suresh Raina, who benefited tremendously with the vision and consistency of their coach.

People come and go that’s indeed the story of life. But there are certain individuals who are hard, if not impossible, to replace and a huge vacuum is created after their departure from the scene. They are missed and remembered.

I think the history of Indian cricket will remain incomplete without a mention of Kirsten, whose contribution in transforming an unpredictable lot into world beaters has to be classified as legendary.

Wasn’t it in the fitness of things that his tenure as the Indian coach came with the World Cup trophy in the hands of his boys? He was instrumental in taking India to the top of the tree in Test cricket and more importantly keeping them in this position for so long.

Kirsten had the desired attributes that were needed to take the team through. He nearly had every quality that allowed him to enjoy the position that could have brought tension and agony to many others in same position.

Remember Kirsten was not the first foreigner to have coached Team India. John Wright of New Zealand was the first one, having taken over in 2000. Then it was Greg Chappell, the celebrated Australian top-order batsman, who took the command in 2005.

Kirsten must have studied a lot of things beyond cricket while taking up the most challenging task of his career in 2008. It was his knowledge about the Indian culture which helped him run the show smoothly.

While Wright had enjoyed success as the Indian coach because of his mild temperament, Chappell encountered all sorts of problems when he decided to take on the ‘system’ instead of finding ways and means to implement his plans in the given circumstances.

Wright had helped India reach the final of the World Cup in 2003 but the team suffered the most embarrassing of first-round exits four year later under Chappell. 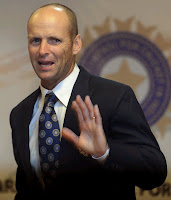 Kirsten has had better record Wright because the team has now regained the trophy after 28 years. In fact the former South African opener has proved to be the most successful of all coaches to have been associated with the Indian team.

Obviously it’s not going to be easy to replace a man like Kirsten and it’s no surprise that the Board of Control for Cricket in India (BCCI) is in no hurry to appoint a new coach even though their international commitments resume with the tour of the West Indies in a few weeks time.

Andy Flower, Duncan Fletcher and Stephen Fleming are being tipped as the front-runners for the job. All of them do have the coaching skills but it may not be easy to pick up from where Kirsten has left. With so much high expectations all around, whoever gets the nod as the coach, will need to have nerves of steel to deliver.
readmore »»