The New Zealanders had their moments during their tour of India. I think they fared much better than what had looked likely after their drubbing in Bangladesh not very long ago. The Indians should have won all three Test matches but they chose to be content with a 1-0 win as they had done on numerous occasions while taking on unfancied rivals in the past.

The New Zealanders consider themselves better suited for the limited overs games than the Test matches. Yet they were successful to have drawn two of the three Test matches with the top ranked side of the world and they were whitewashed by the hosts in the ODI series when they virtually fielded their ‘A’ team.
India did win all the five One-day Internationals, that followed the Test series, but the New Zealanders were allowed the kind of liberty that the mighty teams of the past like the West Indies or Australia didn’t allow when they were ruling the world.

Isn’t it a pity that the Indians have remained so reluctant to go for a clean sweep even when they had their opponents at their mercy? Isn’t it a big surprise that it’s only their second 5-0 win in a ODI series?

The last time India triumphed 5-0 was not a whitewash either. It was meant to be a seven-match series between India and England but it had to be halted abruptly due to the attacks in Mumbai. Although the Englishmen had been totally outplayed by the hosts there were many people who sensed India might not have gone for a 7-0 scoreline for the same reasons that had prevented them from doing it earlier.

So it’s actually India’s first 5-0 win in a five-match series. They have achieved it in the absence of some of their prolific performers who were rested for various reasons. This provided the fringe players an opportunity to have a go at a struggling side and most of them came out with flying colours.
Ironically India, with full strength, had lost a ODI to New Zealand by 200 runs during the triangular series in Sri Lanka only a few months ago. The manner in which India’s less experienced guys forced the Black Caps into submission throughout the five-match series only leaves more question marks about that fateful game. 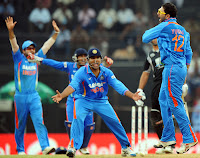 The Indians could have won the ODI series even more convincingly but for the traditional inconsistency of the prolific players. The failures of Gautam Gambhir and Virat Kohli in the last two games was totally against the run of play. If they are not competent enough to negotiate the all spin attack of New Zealand with the new ball, I am afraid, they don’t deserve to be playing for their national team.

That has been the problem of the Indian team over the years. Despite being in possession of a large pool of talented players they have been reluctant to sustain the momentum. The reasons remain unexplained, beyond comprehension to say the least.
readmore »»