Posted by Editor at 1:07 PM .
3 comments
Labels: England v Pakistan 2010
By Syed Khalid Mahmood
What would you expect of the world champions, playing on their own turf, when taking on a demoralized and under-prepared outfit besieged by monumental problems? Obviously the hosts will make mince meat of the underdogs in such a scenario.
But this was not the case in either of the two Twenty20 Internationals between England and Pakistan at Cardiff. The home side emerged triumphant on both the occasions to pocket the mini-series 2-0 but they couldn’t display the kind of efficiency that was anticipated in the prevailing circumstances. 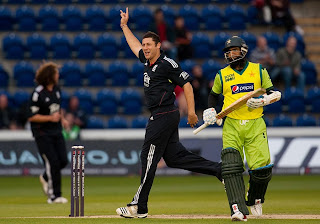 England fared marginally better in the second game, winning it by six wickets. They should have cruised to the target of 90 but they lost four wickets in the process to keep the contest alive.
The bowlers had done the job for England with the speedsters forcing the vulnerable Pakistan top order to submission with some hostile stuff and there was not much element of surprise in it.
Tim Bresnan, generating speed in the region of 90 mph, was rewarded for his magnificent attacking bowling performance and he richly deserved the figures of 3 for 10 off 3.4 overs. Stuart Broad proved equally lethal with the new ball and his short-pitched bowling brought him wickets.
Ryan Sidebottom, for the second game running, delivered an ordinary first over and was taken for runs in double digit. But his second spell was far more purposeful that cleaned the threatening tail.
The spin duo of Michael Yardy and Graeme Swann exploited the conditions by keeping it tight against the batsmen who were looking for singles in the middle overs. Umar Akmal, not for the first time, dared taking on Swann but the off-spinner had the last laugh.
Swann has been at the peak of his career of late and it’s not often to see him clobbered for sixes in the manner Umar did it two times. But the rampaging batsman was foxed by the slower one and it was all over for him.
Pakistan were losing wickets regularly and the overs were ticking by but England could not have taken anything for granted, having suffered against the same opponents in not too dissimilar situation in the past.
How would England forget the onslaught of Abdul Razzaq in Dubai earlier this year? For that matter they would not have taken Umar Gul lightly either after he got away with a few streaky shots.
Pakistan were bowled out for 89 inside 20 overs on a pitch that wasn’t horrible for batting. The bounce, more than the swing, undid the visitors and England were expected to coast to a comfortable win.
Openers Steven Davies and Craig Kieswetter got the hosts off to a confident start but both of them departed on successive deliveries against the run of play. Paul Collingwood and Ravi Bopara also failed and it was left to Eoin Morgan and Michael Yardy once again to do the job.
It looked like that the cricket enthusiasts in South Wales had assessed the situation beforehand and the amazingly thin attendance at the ground reflected the clear lack of interest to be a part of something not measuring to their standard. With a county-standard attendance of 5,821 in a Twenty20 International on a Sunday evening the people had given their verdict at the state of the affairs.
readmore »»