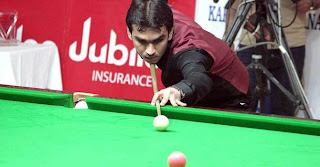 Hamza, hailing from the industrial town of Faisalabad, has been in excellent form of late and it’s just a matter of extending that brilliant run for another week to bring home the continental title.

“Winning the National Championship on my maiden appearance is certainly a fulfillment of a dream but I desire more wins. I will like to extend this purple patch and hope to do very well in the upcoming Asian Under-21 Championship,” Hamza remarked after capturing the national crown at the Karachi Gymkhana on March 25.

Hamza will become the first Pakistani to annex the Asian Under-21 title, should he continue his winning form for a few more days. Mohammad Majid Ali, another highly promising youngster, is the other Pakistani cueist who will be in action at Indore where a total of 30 cueists will be competing for the crown.

The participants have been divided in eight groups with the league matches to be spread over four days. The top two cueists from each group will be advancing to knockout phase starting with the pre-quarter-finals on April 5. The quarter-finals and the semifinals will be held the following day with the event to wind up with final and the prize distribution ceremony on April 7.