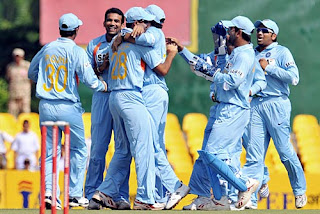 By Syed Khalid Mahmood
India’s present lot of young cricketers have shown the mental strength to cope with the unforeseen and they displayed their growing stature by engineering an emphatic six-wicket win over Sri Lanka in the first ODI of the five-match series at Dambulla on January 28.
There were at least two unexpected things that could have derailed the Indians. One was the century of the veteran Sanath Jayasuriya and the other was the umpiring blunder of Kumar Dharmasena denying Sachin Tendulkar the opportunity of delighting the spectators.
But the credit belonged to the Indian youngsters, who were right behind their inspirational skipper Mahendra Singh Dhoni, to have done the job without showing any signs of nerves.
Jayasuriya has had reputation of being an India-killer having devastated them in the past as well. But having managed just 102 runs at average of 34 in the just concluded three-match series in Pakistan, it seemed extremely unlikely that the ageing warrior will score another fighting century.
Jayasuriya, now in his 40th year, played a superb innings to become the oldest centurion in the ODIs. His knock allowed Sri Lanka to raise a substantial total despite the excellent bowling and fielding by the Indians.
The Sri Lankans were off to a disastrous start when Tillakaratne Dilshan, the Man of the Series against Pakistan, was run out for a duck in the very first over of the day. It was left to left-handers Sanath Jayasuriya and Kumar Sangakkara to counter the new ball operators. Zaheer Khan was treated with respect but Munaf Patel was taken for runs.
The spinners, Pragyan Ojha, Yousuf Pathan, Suresh Raina and Rohit Sharma, bowled tightly after Ishant Sharma, the quickest bowler on show, had delivered another lively spell that’s allow even the likes of Jayasuriya and Sangakkara to score freely.
Ishant Sharma and Zaheer Khan returned to bowl with great control and they dashed Sri Lanka’s hopes of registering a mammoth total despite Jayasuriya’s knock of 107 at nearly run a ball. 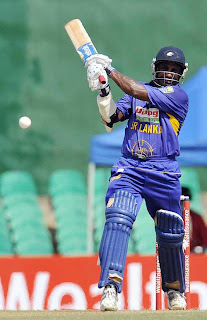 The target of 247 in 50 overs was unlikely to test the Indian batting line-up but a shocking decision by Kumar Dharmasena early in the innings provided an opening to the home side. Dharmasena, now an international umpire, might have taken the stick at the hands of Sachin Tendulkar in his playing days but this was not a decent way to settle scores. He declared the Indian master lbw off a ball that pitched outside leg.
Unlike the past, the Indians, however, were not bogged down after being at the receiving end of another harsh umpiring decision. Gautam Gambhir and Suresh Raina kept the scoreboard moving and their half-centuries put the visitors in a very strong position.
The momentum was kept up by Yuvraj Singh and Mahendra Singh Dhoni, two of the most powerful strikers of the cricket ball, when Gambhir and Raina fell in quick succession.
The spin duo of Muttiah Muralitharan and Ajantha Mendis, who pose the main threat to the Indians, was tackled with confidence and without taking risks. The tactics worked and with Dhoni in total command of the situation there was hardly a moment when India could have felt the pressure. Rohit Sharma also displayed great maturity by rotating the strike and waiting for the loose ball for the odd boundary. The target was achieved with minimum of fuss with as many as 11 deliveries remaining.