The unprofessional attitude of the sports department of Karachi Gymkhana created problems in disseminating details of the 31st Karachi Gymkhana Ramazan Festival Twenty20 Cricket Tournament 2016, being played for the Omar Associates Trophy, which got underway on June 7. 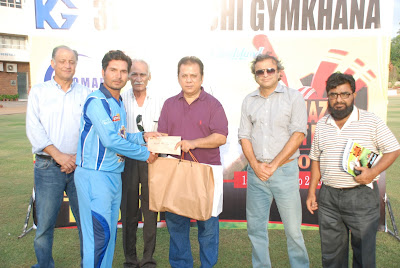 It had been the practice for the last many years to make the details available to the media, through electronic or digital means, as soon as the game was over much before Iftar time.

But that wasn’t the case this time round and it took the organizers nearly a couple of hours to transmit scorecard of the opening match. It was also surprising to find that neither the umpires nor the official scorer, who did the duties, had a copy of the match scoreboard.

In the interim period, efforts were made to contact the Sports Manager of the Karachi Gymkhana but he remained inaccessible with his cell phone being continuously powered off just as it was on the evening when the draws of the tournament were taken out, resulting in inconvenience to the covering journalists.

One of the reasons of the inaccessibility of the sports department officials was stated to be the location of their office which is housed in the basement of the club. It’s a food of thought for the club management to look into and find a solution.

Meanwhile left-arm spinner Fawad Khan and wicketkeeper-opener Usman Khan powered Omar Cricket Club to a crucial six-wicket victory over Medicam XI in the opening match of the Omar Associates Trophy at the Karachi Gymkhana Cricket Ground on the opening day.

Medicam XI, whose skipper Khalid Latif opted to bat after calling correctly, was bowled out for 156 on the final ball of their innings. Looking set for an imposing total after the cameo from Tasawwar Abbas (44 off 19 balls), they lost their last six wickets for only 27 runs with Fawad Khan (3-17) doing the damage.

The 69-run opening partnership in eight overs between Usman Khan (48 off 35 balls) and Noman Anwar (31 off 24 balls) put Omar CC in a commanding position and the momentum was sustained by Mohammad Waqas and Akbar-ur-Rahman who scored 24 each.

The clinical batting performance kept Omar CC ahead of the clock and they duly reached the target in the final over with six wickets in hand. Fawad Khan was adjudged Man of the Match for this three-wicket haul.
readmore »» 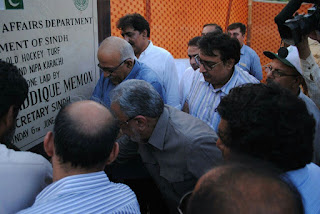 The Sindh Chief Secretary, Mohammad Siddiq Memon, along with the Chancellor of the Sir Syed University of Engineering & Technology (SSUET), Karachi, Jawaid Anwar, unveiled the foundation stone of the sports complex project of the Karachi Hockey Association (KHA), located just opposite the SSUET campus.

The complex will have a hockey ground with astroturf besides a swimming pool and a multi-purpose hall as suggested by Chancellor Jawaid Anwar and approved by the Chief Secretary.

Speaking on the occasion as the chief guest, CS Siddiq Memon observed that upon the directive of the Sindh Chief Minister, Syed Qaim Ali Shah, the allocation for sports promotion in Sindh has been increased in the budget from Rs one to two billion. 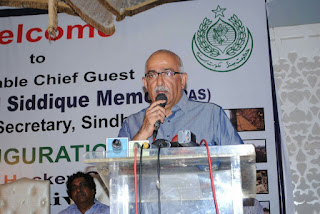 He pointed out that the Sindh Government, besides laying astroturfs, was carrying out construction of sports complexes throughout the province and at present 38 sports-related schemes were under implementation with KHA’s Sports Complex opposite SSUET a part of the same.

He informed that the schemes have been completed in Sukkur, Larkana and Mirpurkhas where astroturfs was laid. On the special directive of the Chief Minister 54 more projects were being initiated and funds allocated thereof in the budget 2016, he informed adding that objective was to make all out efforts to provide sports facilities to the youth of Sindh.

He declared that Karachi Hockey Association (KHA) will be given a grant of Rs 30 lacs this year. Addressing the ceremony, the SSUET Chancellor, Jawaid Anwar thanked the Chief Secretary with whose efforts development of the hockey ground had started and it was a welcome initiative that an astroturf will be laid there. 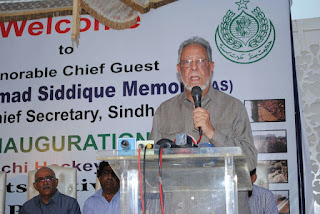 He underlined the necessity of having a swimming pool and a multi-purpose hall in this under construction complex and pointed out that there are a large number of universities, colleges and schools around this ground whose students would be able to benefit from the facilities of this project.

He congratulated the Pakistan Hockey Federation (PHF) and particularly the Karachi Hockey Association (KHA) for making outstanding efforts for the promotion of hockey.

He announced that after the astroturf was laid there, the Sir Syed University of Engineering and Technology will organize an inaugural match between the SSUET’s hockey players, Olympians and Internationals. 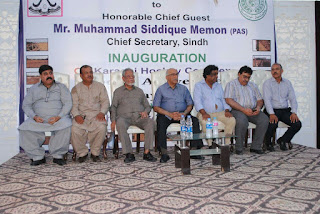 He declared that the university will first hold an All Karachi Hockey Tournament on this ground and will provide a good number of students to benefit from this ground.

He extended all out cooperation of the university towards the promotion of hockey.

Earlier the General Secretary, KHA, Farooq Khan, thanked the Chief Secretary Siddiq Memon, Sports Secretary, Mohammed Rashid, and Chief Engineer, Aslam Maher, for their contribution in the development of sports complex and laying of astroturf which would provide an opportunity for the youngsters to play hockey .

The Senior Vice-President, KHA, Aijazuddin, described the project of sports complex and astroturf as a gift from Sindh Government and the youth should take maximum advantage of the same so that new talent could emerge.

The ceremony was largely attended, among others, by, Anwar Ali, Advisor to Vice-Chancellor, Registrar Syed Sarfraz Ali, besides Olympians Saleem Sherwani, Qamar Ibrahim, Sameer Hussain and Internationals Jan Mohammed, Mohammed Ali and Mubbashir Mkhtar who is also the Director Sports of the SSUET.
readmore »»