Data Steel were crowned as the new national champions when they overpowered Solax 130-112 in the most absorbing of finals of the National Bridge Championship 2010 in Lahore on May 4.
Besides becoming the national champions Data Steel have also earned the right to represent Pakistan in the in the World Series Championships 2010 to be staged in Philadelphia, Pennsylvania, USA, from October 1 to 16 and they will also compete in the Commonwealth Nations Championships 2010 to be organized in New Delhi, India, from October 25 to 31. 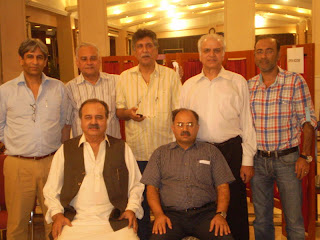 The high-profile Data Steel outfit is now looking forward to bringing laurels for the country during the upcoming international events.

Data Steel featured the President of the Pakistan Bridge Federation (PBF), Tariq Rasheed Khan, as well as the President of the Punjab Bridge Association (PBA), Javed Khalid, besides some of the leading bridge players of the country in Rashid-ul-Ghazi and Tahir Masood.
Tariq Rasheed, who led Data Steel to their maiden national title, believed that his team possessed the expertise and the mental strength to come good in the toughest of situations and they were able to do it at the Lahore Gymkhana.

He acknowledged that the final against Solax, spread over four segments of 16 boards each, was a tough one and both the contestants had a chance of pulling up a victory until the last stages.

It was only in the final segment that Data Steel was able to assume control through superlative bidding and back up that carried them to victory in the final, broadcast live through the internet.

Earlier in the semifinals, Solax had stunned Preempters, who topped the points table at the end of the league matches, while Data Steel knocked down Giants, the defending champions.

Prempters, having the likes of Jan-e-Alam Fazli and Abdul Rahman Allana to complement Jahangir Ahmed, Farrukh Liaqat and Izzat Khalil, could not extend their form in the tie against Solox who had ended up last in the race for semifinals.

Solax remained in the driving seat and galloped serenely into the final through unremitting brilliance. Somehow the top team after the first three days failed to dazzle and the resolve demonstrated in the league matches fizzled away. Throughout the semifinal, Solox reflected enthusiasm undiminished and at times their effort looked awesome. 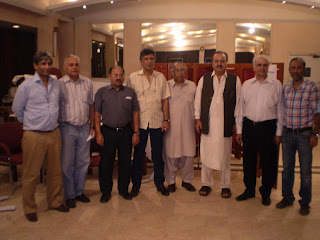 Data Steel proved too good for Giants featuring Masood Mazhar, Mirza Shauq Hussain, Muhammed Mubashir Puri, Hamid Mohiuddin and Asfandyar Shauq. The reigning champions were unable to come to terms with the Data Steel team that was dauntless and daring.Giants failed to sparkle and conceded defeat virtually midway after 48 of the 64 boards had been played with Data Steel leading by 160 to 70. They were dethroned rather softly in the end.

Hosts Punjab Bridge Association (PBA) recognized the quartet if Ihsan Qadir, Safraz Butt, Syed Ameer Hasan and Umair Kousar, for having conducted the event nicely by incorporating the use of latest technology in the scoring system commissioned by the Karachi-based Pakistan Bridge University (PBU), another brainchild of Tariq Rasheed Khan. readmore »»