Contrary to what was being anticipated worldwide the opening ceremony of the XIX Commonwealth Games 2010 Delhi at the Jawaharlal Nehru Stadium. on October 3 turned out to be a magnificent earning appreciation from the international media.

The newspapers having been critical of the Games preparations earlier carried headlines like 'An ancient land opens its heart to the world', 'India opens doors to the world at opening ceremony' to describe the two-hour cultural extravaganza catching the imagination of the spectators as well as the millions watching it live on their television sets.

The respected British newspaper The Guardian described it was a moment of national pride for India.' India has arrived: spectacular ceremony opens Commonwealth Games,' read the newspaper's headline.

"This was the moment that 1.2 billion people – there are few in India who were still unaware of the event – had been waiting for," it added.

The Daily Mail was also lavish in its praise of the ceremony which showcased the centuries-old Indian culture to a packed crowd..

"The XIX Commonwealth Games crawled up off the canvas last night with a display of pageantry and technical wizardry that, finally, projected the image India craved on to two billion television sets around the world.” the newspaper said.

"India put on its best face on Sunday night and pulled off a brilliant opening ceremony that was extraordinary in its ambition and execution. It was everything the organisers had promised and more - an energetic celebration of all India has been and all it intends to be," wrote The Daily Telegraph.

The Sydney Morning Herald reported the ceremony as "A vibrant celebration of 5,000 years of Indian culture with just a hint of Bollywood showcased in a performance involving more than 6,000 artists.

"India has won the first unofficial gold medal of the Games - for best team uniform, The Indian athletes looked like royalty in their smart traditional maroon tops with gold braided scarves. Slick and sensational," it added

The President of the Maldives, Mohamed Nasheed, who witnessed the Opening Ceremony of the XIX Commonwealth Games 2010 Delhi, hailed the arrangements for the Games and dismissed the criticism that preceded it as creation of 'old and established' media which failed to judge 'new' India.

"It is difficult for some of the people specially media, old and established, to judge India...I think it is their difficulty to understand how India has evolved," he said, adding some people have to "certainly understand that new India is different,” he remarked.

"The opening ceremony was very spectacular and very beautiful. I am sure the Games are going to as perfect as any games," he thought.

Meanwhile the President of the International Olympic Committee (IOC), Jacques Rogge, reckoned that a successful Commonwealth Games will provide India the foundation to think about a future Olympic bid.

“I think everything will be fine. Of course you can only judge the organisation at the moment of the closing ceremony but I think it’s going well. There is still a difference between Olympic Games and Commonwealth Games. The size of the Olympic Games is bigger, there are more athletes and more sports,” he explained to the media after attending the glittering opening ceremony of the Commonwealth Games in New Delhi.
readmore »»

Man of the Match, Zaheer Khan, and Man of the Moment, VVS Laxman, played the pivotal role in guiding India to their narrowest win in Test cricket at the PCA Stadium, Mohali, on October 5.

The match, lasting four and a half days, went to the wire and it lived to the reputation of being another grueling battle between Australia and India. In fact as Ricky Ponting acknowledged in the presentation ceremony it was the closest of all Test match he had played in over the last many years.

Who says Test cricket is dead? I hope the functionaries of the Board of Control for Cricket in India (BCCI) would feel proud of their belated decision to include a two-Test series instead of having just limited-overs games during Australia’s visit to India.

The cricket enthusiasts could not have desired a closer Test match. Both the teams came up with wonderful performance to stay afloat and there was plenty to cheer about for the spectators throughout the game.

India did well to stage a comeback after shocking fielding display on the first day. Skipper Mahandra Singh Dhoni was the chief culprit, having floored as many as three catches. No matter what he might say the experts believed that the disease of continuous cricket was taking its toll and Dhoni’s poor wicket-keeping was a result of the very little time he got to spend in Mohali because of his preoccupations in the Champions League Twenty20 tournament. 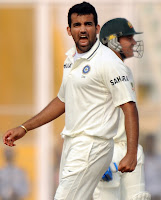 Zaheer, who reversed the ball brilliantly, was chiefly responsible for not allowing Australia to build an imposing total despite the generosity of the Indian fielders. Bowling the visitors out for 428 after spilling half a dozen catches wasn’t a bad effort. Mind you they had to pay heavy price for dropping those sitters.

India, with Sachin Tendulkar and Suresh Raina in full control, appeared poised for a decisive first innings lead on the third afternoon but an amazing collapse found them 23 run short of Australia’s total.

Many people thought that the match was heading towards a draw as the first innings of the two teams had consumed full three days. But I always thought that the game was on because the Australian batting lacked the strength to compile runs on the wearing track.

Ishant Sharma bowled his heart out on the fourth morning, despite carrying an injury, to rock the Australians. Then the spinners also did their job and Zaheer’s fiery spell cleaned the tail to set the home a rather comfortable target of 216.

As they say no fourth innings target is small the Indians made a mess of it in the final session and the loss of four key wickets tilted the balance towards Australia. India were still 161 away from victory when the stumps were drawn after a dramatic fourth day’s play. 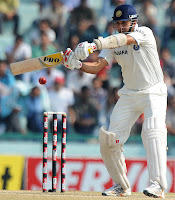 India’s hopes rested on the shoulders of Tendulkar on the fifth day. But not surprisingly he fell short of expectations again. Dhoni was as miserable with the bat as he was behind the stumps.

Laxman changed the complexion of the game with his elegant stroke-play and the Australian bowlers ran short of ideas. He found an able partner in number 10 Sharma who was not afraid to watch the ball till the last moment.

With tension mounting as India inched closer, the game opened up with Sharma’s dismissal. But Laxman drove India home in what must have been one of his greatest knocks yet.
readmore »»