Ponting talking of another Ashes whitewash

Posted by Editor at 5:30 PM .
0 comments
Labels: Ashes 2010-11, Ricky Ponting
By Syed Khalid Mahmood
The Ashes 2010-11 is still quite a few months away but the war of words has commenced with the Australian skipper, Ricky Ponting, not ruling out the possibilities of his side establishing total supremacy over their traditional rivals. It will be interesting to watch how the England camp reacts to such claims. 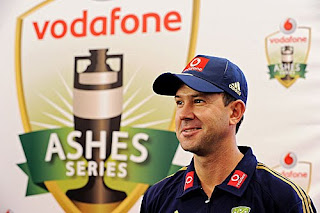 The England supporters would not forget that the Australians, wounded by the Ashes loss in 2005, had hit back so decisively 18 months later to regain it in style.
Will the history repeat itself? England had snatched the Ashes last summer and now the Australians are itching to take it back when the battle resumes later this year at the Gabba in Brisbane.
"It's absolutely possible. There's no reason why not. It's all in our hands. It's how well we play and how well we take charge of different situations. We've learnt from a lot of the mistakes that we've made. There's no doubt we made some mistakes in the last Ashes series in England that probably at the end of the day cost us the series,” Ponting was quoted as saying in Melbourne.
"We know now that we're a more experienced and probably a better team now than we were then. We put that together plus we're playing in our conditions, we hope to win this series and win it well. Batting collapses probably were the reason we lost the series last time around and our inability to bowl them out on the last day in Cardiff. I have got confidence in the squad of players that we've got that they are going to be good enough to win an Ashes series," he added.
"James Anderson and Stuart Broad and those guys have really stepped up. They are coming together well as a team. We have to make sure at the end of the Indian tour that we have got everything in place to make sure that we are ultra-competitive against them,” Ponting reckoned. 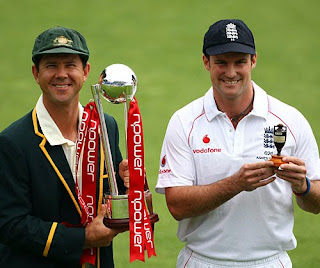 "England have certainly bowled well and they have had great conditions to bowl in as well, the English. We'll have a different set of conditions and a different ball when they come out here and I'm sure our guys will equip themselves really well. We know where we have to bowl to all of their batsmen. They have got no one there who's going to surprise us at all," the Australian skipper thought.
I think it will be a tall order for Australia to whitewash England again even though the ball will not be swinging as much as it does in the Mother country and the hosts will be boosted by the return of Brad Haddin, Peter Siddle and Nathan Hauritz.

Australia would obviously enter the upcoming Ashes series as the favourites mainly because of the home advantage but they can’t be expected to prevail over the current England side in every Test,

Unlike the 2006-07 Ashes series, Australia’s bowlers haven’t enjoy the phenomenal success of late and on the contrary the Englishmen have given a better account of themselves during the last few seasons.
readmore »»