Enigmatic Sami raring to have a go 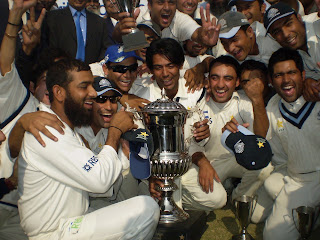 Mohammad Sami is all set to resume his international career. The 28-year-old fast bowler has celebrated his surprise recall to national duty by bowling Karachi Blues to a spectacular 141-run victory over the fancied Habib Bank Limited (HBL) in the final of the Quaid-e-Azam Trophy at the National Stadium, Karachi.

He could not have come up with better performance on the eve of boarding an aircraft for a long journey to Australia. It was his devastating spell on the third day that sealed the fate of the final of the premier national competition.

Sami has shown of late that he can handle the pressure well enough that indeed augurs well for his future. With Pakistan due to play so many games in the coming year he will have an ample opportunity to improve upon his ordinary record in Test cricket.


More importantly from his point of way, since Pakistan would be engaged in a lot of matches in England next summer, playing against Australia before taking on the hosts, he could be an asset for the side.

If his latest form has to serve as any indication he can be one of the stars of the Pakistan team in the near future should he not break down or succumb to the pressures of international cricket.

It was being estimated that he operated at well over 90 miles an hour in the recently concluded Quaid-e-Azam Trophy. He is a fierce competitor and he doesn’t believe in half measures even while playing club cricket.

He has been a genuinely quick bowler all along his career but in the past he was guilty of faltering in line and length once too often. His captains were not all that tactically sound either to have utilized his enormous talent.

Sami would have been a different bowler had he a skipper in the field like Imran Khan and Javed Miandad who knew the art of getting the best out of the youngsters. He could have been much more effective at the international level with proper guidance.

Lately Sami has also impressed the critics with his captaincy skills and his ability to lead by example has gladdened many hearts. Will that be able to translate into success in Test matches and One-day Internationals remains to be seen.

Right now the leadership of the team is in the hands of Mohammad Yousuf, who doesn’t look like all that proactive or inspirational in the field but reportedly Sami has been added to Pakistan's 16-man Test squad against Australia upon his request in particular. 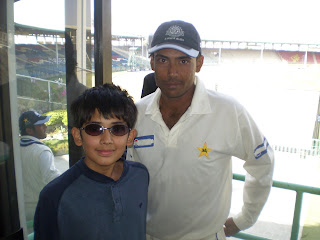 If that indeed is the case then Sami could expect better handling from the captain this time round. It’s very important for the bowler to know that he enjoys the total support of his skipper.

Sami has got a new lease of life to an international career. He must grab the opportunity with both hands. By the look of things he is in the form of his lifetime at the moment. Better handling from Yousuf can provide Pakistan another potential match-winner.