It took Pakistan many a month to finally overpower Australia in an international cricket match on July 5 but they needed less than 24 hours to topple the Aussies again to clinch the T20 series 2-0.

It’s not often that the Australians crash while chasing an average of less than eight and a half in a Twenty20 International but they collapsed against Pakistan two times in as many days. 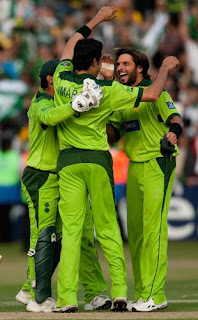 I don’t know if the Australian think-tank will consider back to back defeats in T20 games as a wake-up call for the upcoming Test series against Pakistan or not but there’s very little doubt in one’s mind that it won’t be a walkover for the returning Ricky Ponting.

Irrespective of the comparative strength of the two teams, Pakistan would obviously feel much more confident going into the Test series after having humiliated Michael Clarke’s boys who had captured the T20 crown only a few weeks ago.

Clarke has looked a reluctant leader in what we have seen of him so far. He is probably more concerned about the loss of his own batting form and his weaknesses are reflected in the field.

It was really pathetic of him not to have posted a slip for Mohammad Aamer when Dirk Nannes was on a hat-trick after dismissing Umar Akmal and Shahid Afridi on successive deliveries.

As the luck would have it Aamer was forced to edge the ball in the vacant slip position and a bewildered Nannes could only watch the action helplessly. Any proactive captain would have brought a slip in place at least for the hat-trick delivery which Clarke didn’t.

It was second time in the same over when an outside edge had resulted in a boundary. Earlier Shahid had topedged Nannes over the head of wicketkeeper Tim Paine while attempting yet another agricultural shot.

Ponting is obviously a far more experienced captain who would like to extend his winning streak in Test matches. His aggression and tactfulness could make the difference in what is now expected to be a close contest. 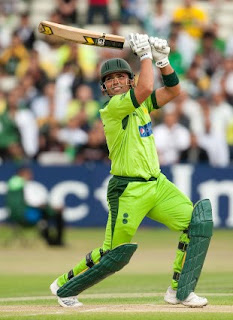 Shahid, on his part, would be hoping to keep performing miracles. He knows that anything becomes possible when the lady luck moves in to defy logic. When Pakistan get on song every other team has to take a back seat.

The Australians had managed to reign supreme at home despite some close shaves. They had overcome odd periods of uncertainties to whitewash Pakistan in every format of the game but they must have discovered by now that it’s a different ball game in every new series.

Pakistan are on a high with T20 wins and the critics who had written them off completely before the start of the long summer in England must be wondering why did they dare doing it.

Trust me it’s never advisable to write Pakistan off because they always have a chance of doing something sensational. No matter how much superior their opponents may be they have had the knack of taking them with surprise.
readmore »»