Well it wasn’t exactly a case of Michael Hussey stealing a win from Pakistan but it was rather a matter of preventing embarrassment for Australia who had dominated the tournament only to be put in the jail in the unlikeliest of circumstances.

Hussey, who smashed an unbeaten 60 off 24 balls, to take the Aussies into the final had performed similar acts in the past as well. Cometh the hour, cometh the man describes him perfectly. 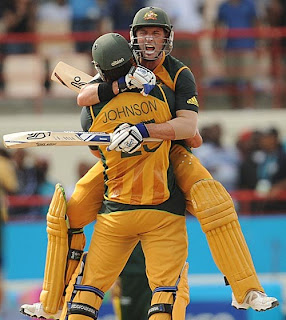 He has had his share of his ups and downs, like any other human being, but his level of commitment and the fierce determination to stand tall in crisis are the virtues that make him the standout batsman of his era.

Australia were expected to be tested in the semifinals because Pakistan have had the knack of bringing about the downfall of the giants against the run of play. On paper and in form the Australians were streets ahead of Pakistan but it was always going to be a big challenge for Michael Clarke and his men to tame the side that had sneaked in more on luck than performance.

Pakistan had found their way into the semifinals after having lost three matches while Australia had strolled there without dropping a single game. So there was absolutely no comparison between the two sides when they arrived in St Lucia for the knockout encounter.

As people, not even possessing knowledge of the game, kept praying all day for Pakistan to come good and Australia to falter had their wishes very nearly fulfilled. The Australians played much below their potential because you won’t see often Brad Haddin conceding 10 byes in a T20 game.

Leg-spinner Steven Smith, who had become one of the shining lights of the tournament, suddenly became the weak link of the best bowling attack on show. It was very rare to find the Aussies committing unforced errors.

The kind of batting strength Australia had even the target of 192 should not have caused problems. But their batters also found it hard to come to terms with the Pakistan factor leaving far too many for the end.

Cameroon White was not overawed and he changed the momentum before perishing and the stage was set for Hussey to do it. The Australians accomplished their mission of winning the game but they shouldn’t have let it come so close. 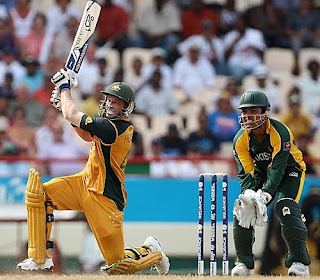 On Pakistan’s part they should be credited for having advanced to the semifinals even after having lost to Australia in the first round and then suffering defeats at the hands of England and New Zealand in Super Eights.

Pakistan came very near to spoiling Australia’s march towards glory and it was only at the fag end that they let the initiative slip. They had the mighty Aussies under pressure for quite sometime in the semifinals before going down fighting.

In fact Pakistan, the kind of resources they had and keeping in mind the situation in which the team was selected prior to the appointment of the skipper, exceeded all expectations by making into the semifinals.
readmore »»