The second edition of the Vital Five Ramazan Festival Twenty20 Cricket Tournament 2012 for the State Life Trophy, having been inaugurated on the first day of the Holy month of Ramazan, is in full swing. It seems to be having all the ingredients of becoming the most sought-after festival event in town. 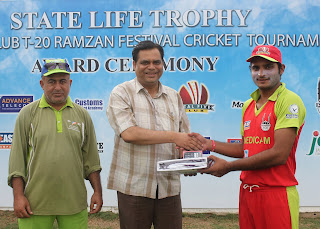 Being organized by the Vital Five Club, another brainchild of Jalaluddin, a former Test fast bowler and now a qualified coach, the tournament is offering lucrative prizes to the outstanding performers.

Three grounds, instead of just one last year, are being used for league matches to have a cushion for rains which are likely to come down sometime in August.

Besides the Vital Five Cricket Ground housed in Khayaban-e-Rahat, DHA, a few games have also been staged at the Rashid Latif Cricket Academy Ground in Korangi and the Landhi Gymkhana Ground in Landhi.

The Vital Five Cricket Ground has been upgraded with the commissioning of a brand new pitch besides a couple of practice pitches at two different corners of the arena. Proper maintenance and watering have allowed the outfield to remain lush green even without any rainfall during the year so far. 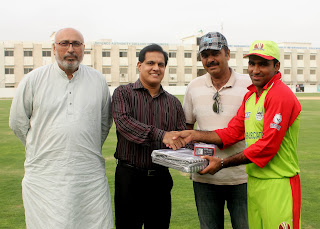 Both the pitches, being used for the State Life Trophy matches, are sporting in nature with the batsmen getting full value for their shots and the bowlers having plenty of encouragement too.

It’s one of those rare grounds where fast bowlers as well as spinners have been getting wickets. Some exciting matches have already been witnessed in the tournament and surely there are many more in store with the knockout games coming up shortly.

The total number of the participating teams, as last year, remains 16 and they have been divided equally in four groups in the first round. Top two teams from each of the four groups will be advancing to the knockout phase, starting with the quarter-finals. 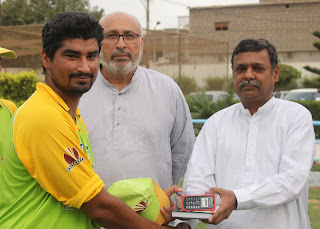 Defending champions Vital Five Cricket Club has been placed in Group C alongwith Medicam CC, Brothers CC Dadu and Eaton CC while Omar CC, who went down fighting in the final, is drawn in Group A in the company of Mohammad Hussain CC, United Sports, Dubai Islamic Bank.

Two teams from each group will be qualifying for the quarter-finals. There’s a galore of prizes on offer. Every day the Man of the Match walks away with a couple of expensive gifts and there are a couple of presents for the other outstanding performers as well.

But all eyes are on the jackpot of Rs 400,000 which will be collected by the winners while the runners-up will be getting Rs 200,000 in the presentation ceremony on the last day of the tournament in which the cash prizes to be disbursed would be in the excess of Rs 700,000.
readmore »»