Posted by Syed Khalid Mahmood at 12:05 PM .
0 comments
Labels: ICC, Pakistan Cricket
By Syed Khalid Mahmood
As they say better late than never. The Chairman of the Pakistan Cricket Board (PCB), Ijaz Butt, has stood up to challenge a decision of the International Cricket Council (ICC) taken  a few weeks ago. It appears as if the PCB took their time in assessing the pros and cons before finally deciding to act. 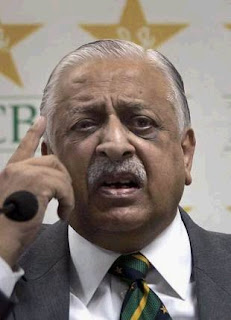 The ICC, in their board meeting in Dubai on April 17, had decided to strip Pakistan of hosting rights for the next World Cup because of the uncertain security situation in the country.
"It is a regrettable decision but our number one priority is to create certainty and deliver a safe, secure and successful event and the uncertainty created by events within Pakistan created a huge question mark over our ability to do just that,." the ICC President, David Morgan, had said in the statement issued after the meeting.
Now the PCB Chairman, after having spent some time in the United Arab Emirates (UAE), has changed his tone and is using a different language against the governing body of the tone.
Ijaz Butt, in a media briefing at the Qaddafi Stadium, Lahore, the headquarters of Pakistan, upon his return from the UAE, came down hard at the ICC decision.
He was highly critical of the manner in which the ICC decision was taken describing it as "legally flawed...unfair and discriminatory" announcing that Pakistan intended to fight for its right as co-hosts for the mega event. The PCB has also issued a legal notice to the ICC.
"We are most concerned about the manner in which the ICC took this decision, There was no notice prior to the meeting that a decision of this nature would be taken. There was neither proper security assessment of Pakistan nor of the other co-hosts of the 2011 Tournament. We believe that more could and should have been done to review the actual situation to deal with the matter on a non-discriminatory basis. We will push for the matter to be expedited," Ijaz Butt announced.
The PCB Chairman claimed that the status of the 2011 World Cup was not on the original agenda of the ICC Board meeting on April 17 and 18 implying that Pakistan wasn't given a fair opportunity to defend its case as a co-host.
"This issue was not on the agenda. There was a discussion of the Sri Lankan attacks on the agenda and this topic came up. They never gave us notice and it was not on the agenda. We want to revoke the decision full stop," he added.
The PCB Chairman was of the opinion that there was also uncertain security environments in the other co-hosts, India, Bangladesh and Sri Lanka, and that provisions were in place for such decisions to be taken as late as 18 months before an ICC event, something that would have given the board time to prepare a security plan and for inspections to be carried out. 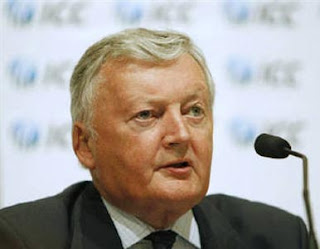